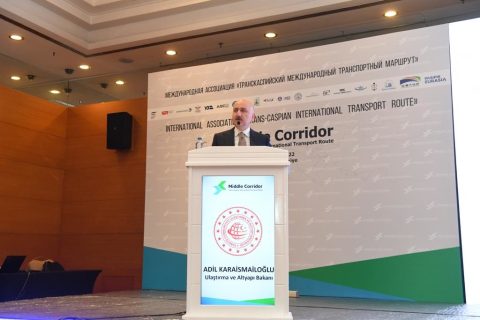 Turkey has a master plan to “breathe fresh air in Black Sea connections and become a Middle Corridor superpower”. Investing in and developing rail freight is a step toward growing the Middle Corridor. However, “focusing on other transport modes and facilitating multimodality will be Turkey’s focus”, explained Turkish transport Minister Adil Karaismailoğlu.

Karaismailoğlu emphasised Turkey’s plans regarding the Middle Corridor, the broader Central Asian market and the Turkish domestic market during a general assembly of the Trans-Caspian International Transport Route Union. The ‘project of the century’, as he called the Kanal Istanbul project, will be a flagship toward improving Black Sea connections and facilitating cargo forwarding via the Middle Corridor.

Simultaneously, Turkey will not lag in making rail freight even more robust. The country aims to increase the capacity of the Baku-Tbilisi-Kars railway line and set aside a larger budget for rail investments in 2023.

“From the opening of the Baku-Tbilisi-Kars Line in 2017 until the end of April 2022, nearly 1,070,000 tons of cargo were transported. Our main goal for the Baku-Tbilisi-Kars route is to operate 1,500 blocks of trains per year and to reduce the 12-day transit time between China and Turkey to 10 days”, said Karaismailoğlu.

Moreover, he underlined that Turkey increased its freight load carrying capacity from 35 million tons in 2020 by 10 per cent to 38 million tons by the end of 2021. “Our international shipments increased by 24 per cent in 2021. Our goal is to increase these figures to make the railway one of the strongest parts of transportation. In this direction, I would like to state that we are planning to create a carrying capacity of 73,2 million tons in a total area of ​​19 million square meters in 26 logistics centres”, emphasised Karaismailoğlu.

Finally, he also mentioned that “as Turkey, we consider our railways as priority projects. We increased the share of railways in our transportation budget to 47 per cent in 2020. In 2023, we will increase this rate to 60 per cent. This indicates our commitment to increasing the share of railways in transportation from 5 per cent to 22 per cent. We will increase annual freight transportation from 55 million tons to 448 million tons. Turkey will have a safe, fast, efficient and effective railway infrastructure as soon as possible”.

A fresh breeze coming in

However, the most interesting part of the Turkish plans comes from the sea. The Turkish government started constructing the Kanal Istanbul project in June 2021. But what is the Kanal Istanbul apart from the project of the century? The Istanbul Canal, as translated into English, is a massive project for an artificial sea-level waterway planned for construction on Istanbul’s western outskirts. It will function as a bypass to the Bosporus strait and provide extra capacity for sea transit between the Black Sea and the Mediterranean.

The project will include the construction of ports and container terminals, logistics centres and the integration of railway lines. Estimations for the project’s completion place it in a seven-year timeframe. “We will further strengthen the Middle Corridor by giving a breath of fresh air to the maritime trade in the Black Sea and the Mediterranean with the project of the century-the Kanal Istanbul. With our increasing importance to the railway and our investments focused on the Middle Corridor in different transportation modes, we contribute to facilitating the use of the route and increasing its preference”, said Karaismailoğlu.

Of course, the Istanbul Canal is not a project originating from the need to improve the Middle Corridor. It has been on the Turkish government’s agenda for years now, with initial proposals in place for decades. Nevertheless, the construction timing fits the increased Middle Corridor traffic pretty well and could serve the route in the longer term apart from using the momentum.