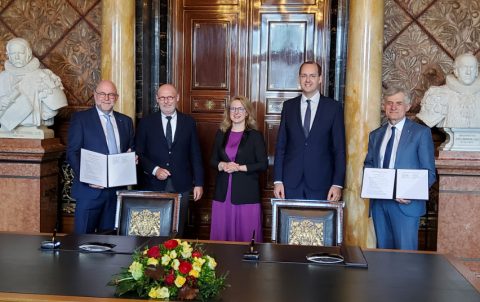 The ports of Hamburg in Germany and Klaipeda in Lithuania have signed an MoC to “strengthen cooperation in developing and implementing joint projects and developing new logistics routes for maritime and rail transport between Germany and Lithuania”.

“The maritime and rail connections between Lithuania and Germany are an important part of international logistics chains and are becoming even more crucial in today’s geopolitical context. We have high potential to develop transport connections between the two regions, strengthen economic relations between the countries, and attract greater cargo flows”, mentioned, among others, Marius Skuodis, Minister of Transport and Communications of Lithuania.

The memorandum of cooperation between the two parties will be in effect for five years. It was signed during the scheduled visit of Marius Skuodis to Germany. He was also accompanied by a delegation consisting of the heads of the port of Klaipeda, Lithuanian Railways and carrier associations. The presence of Lithuanian Railways indicates that rail is on top of the cooperation agenda between the ports and countries.

LTG has already launched an important intermodal rail route connecting Kaunas with Duisburg in Germany. However, this seems to be only the beginning of broader cooperation now also including the port of Hamburg. For Lithuania, Germany functions as the key country to diversify its cargo flows, whether by sea or rail, given the situation in Eastern Europe and the war in Ukraine.

“Germany is a particularly important partner of Lithuania, with which we seek to improve connectivity in all modes of transport. We are making efforts to diversify freight flows further. We are expanding our relations with the major German seaports and looking for solutions to increase rail transport in the Western direction”, said Skuodis.

During the MoC signing meeting, Skuodis also discussed the rail possibilities between Germany and Lithuania with several German partners. He underlined to them that the port of Hamburg and Germany, in general, could “use the increasing opportunities to transport cargo via rail to the Baltic Region and benefit from the new perspectives opened up by Rail Baltica and the European gauge railway line under construction in the Baltic States, which is already being used for rail cargo flows from Europe to Kaunas Intermodal Terminal”.

He also suggested that the Kaunas-Duisburg route that allows transporting semi-trailers and containers by rail to other terminals in Germany, Italy, Poland, Belgium, the Netherlands and Sweden could be the blueprint of a similar connection between Kaunas and Hamburg.

Do you want to learn more?

Are you interested in learning more about Lithuania and its business potential? Do you want to get informed about the new routes linking the country with Western Europe? On 14-15 June, we organise the RailFreight On Tour-The Lithuanian Edition in Vilnius, where we will discuss the possibility of a profitable rail business in Lithuania and the broader Baltic region.

During the event, interested parties will have the chance to hear more about developments such as the Hamburg-Klaipeda cooperation, get in touch with local players and explore possibilities for their own businesses. Take a look at the event page here and register here.