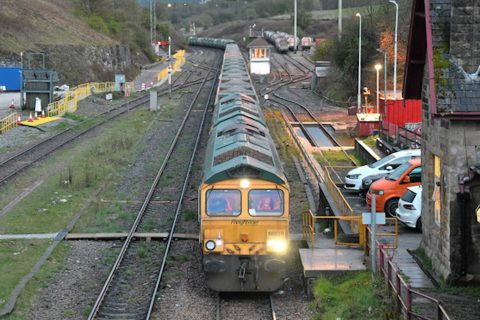 Freightliner’s ‘two for one’ deal has passed the milestone of its first year of operations. The carrier has been running their ‘jumbo’ trains for over twelve months, combining two bulk aggregates trains into one working from Derbyshire’s Tunstead quarry to destinations in London and southeast England. The operational advantage of occupying one train path with two trains has helped significantly increase rail freight productivity and support numerous construction projects.

The sight of mid-train motive power may be pretty common in cross-continental settings, but it is something of a novelty in the UK. In an echo of operations familiar to Genesee & Wyoming, their North American parent company, Freightliner, has made the practice a part of the Brtish rail freight scene. As they’ve become known, Jumbo trains have become a regular feature of services running from Tunstead Quarry in the Peak District to destinations in the London area. With over twelve months of operational experience clocked up, the company has every reason to celebrate its success.

A familiar sight around London

Trialled over a year ago, the jumbo train followed the familiar operational pattern of double heading. That formation has been successfully operated at up to 4230 tons trailing weight, conveyed in 44 wagons. With approval gained from the Railway Safety and Standards Board (RSSB), Freightliner has been able to start operating return journeys with a locomotive mid-consist. This is a new method of working, says Freightliner. It brings a number of advantages, including reduced assembly and shunting operations, better use of facilities at Tunstead, and consequently improved safety. 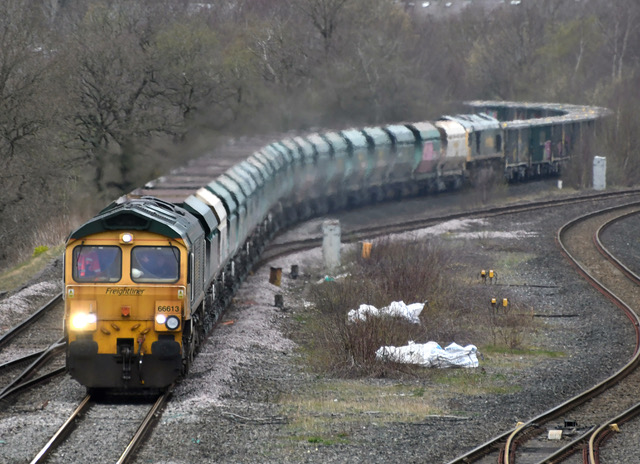 “Jumbo trains have become a business as usual operation and are the heaviest trains regularly operating out of the Peak District and on the West Coast Main Line”, said Chris Matthews, Freightliner Rail Industry Manager. The trains have become a familiar sight at destinations around London too. “The first Jumbo service conveyed wagons for Battersea and Paddington. Since this first operation, we have operated to further terminals in the area at Bow and Park Royal.”

Streamlined another element of operations

The mid-engined formation has been most effectively used on the empty stock workings, heading north up the busy West Coast Main Line, where train paths are at a premium. “Jumbo trains have been trialled successfully via diversionary routes to allow them to continue to run at times Network Rail needs to close key sections of the railway for maintenance”, said Freightliner’s Matthews. “We have trialled operations via alternative routes north of Crewe, assessing journey time, required power application, and fuel consumption to develop the most efficient routing.”

Aggregates specialist Tarmac, the customer for the jumbo train operations and a long-standing advocate of rail freight, supports the concept. Not least, it delivers more tonnage more reliably to their distribution centres in the booming South East. Network Rail, the infrastructure agency, is also in agreement. “This really is a step-change in freight operations”, said Mike Byrne, a Freightliner senior manager, in a recent social media post. “It’s good to see that the jumbo train concept out of the Peak District has streamlined another element of [rail freight] operation.”

Freightliner, for their part, have big plans for their big trains concept. “Looking to the future, we are developing further options with Tarmac and Network Rail to increase the number of trains operating over the next twelve months”, said their spokesperson. Rail freight customers can be confident this two for one deal isn’t subject to a ‘while stocks last’ clause.