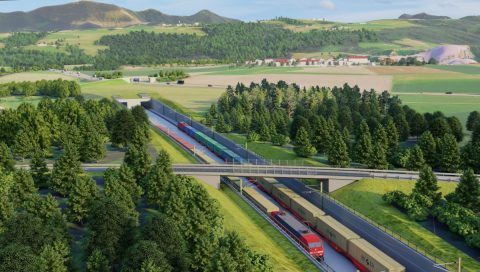 Route section to Brenner Base Tunnel gets into planning phase

Deutsche Bahn has awarded a contract to the engineering joint venture ARGE to plan the Innleiten-Kirnstein railway line. The section is part of the German-Austrian railway route connecting from the north to the Brenner base tunnel. ARGE will undertake the structural engineering and design of the Innleiten-Kirnstein line, including plans for tunnel construction, overground routing and other supporting structures.

ARGE is a joint venture of Amberg Engineering AG and Obermeyer Group, working closely together for years. Their contract with Deutsche Bahn targets the “planning of the Innleiten-Kirnstein section of the Brenner northern approach. The planning comprises two tunnels in Ringelfeld and Steinkirchen, including the tunnel technical equipment, the planning of the rail and road overground routing and the structural engineering and structural design for the new flyover structures, troughs, noise protection walls and supporting structures”, explained the two companies.

Amberg and Obermeyer are aware of the project’s significance since they understand that the line connecting southern Germany with Austria and the Brenner base tunnel is crucial for rail traffic, especially for rail freight traffic to and from Italy. Since the project is implemented in a sensitive area in terms of natural preservation and local community well being, the two companies ensured that they will try to “implement the project optimally according to the customer’s objectives and in dialogue with the public”.

What is the route to the Brenner Base Tunnel?

A year ago, ÖBB and DB presented their joint plans to construct a route that would link southern Germany and Austria to the Brenner Base Tunnel. The new track is to secure the capacity at the northern approach to the tunnel in the long term. The expectation is that rail traffic, especially freight, will increase when the tunnel is opened. Around 47,5 kilometres, and thus, most of the selected route is in German territory. The Austrian section is approximately 6,5 kilometres long. The aim is to complete the track to the tunnel by 2038.

Multiple routing variants were examined for the route’s positioning and design. The optimal one was the route that leads from the Austrian Schaftenau via the municipalities of Kiefersfelden, Oberaudorf and Stephanskirchen east past Rosenheim to Ostermünchen. The selected 54-kilometre route runs 60 per cent underground. “The variant with by far the highest proportion of tunnels protects people and the Inn Valley in the best possible way”, had commented Andreas Scheuer, German Federal Minister of Transport.

As mentioned previously, the route leading to the Brenner Base Tunnel is planned to pass through some sensitive areas in a region known as Inn Valley. As a result, some of the structures to be part of the line are scrutinised to determine whether they fit into safety regulations. One of them is the interchange at Niederaudorf, close to Kirnstein.

The interchange at Niederaudorf was initially planned as an above-ground transport facility; however, research proved that this option would adversely affect residents and the environment. To counteract this, a local interest group suggested that the junction be built underground. A study by the German Center for Rail Transport Research (DZSF) examined the possibilities of constructing underground connection points. However, such an undertaking proves to be complicated for safety reasons, while no precedent project in the region could be used as an example. The German Federal government and DB Netz are to examine all options in detail and develop a feasible solution.