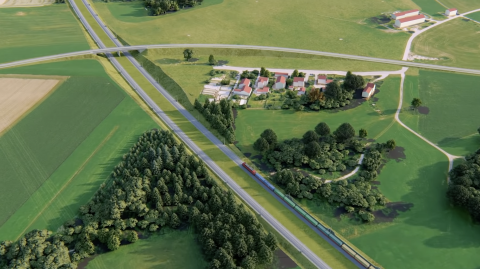 The route for the new German-Austrian railway line from the north to the Brenner Base Tunnel (currently in construction) has been decided. Of the five possible routes, the so-called ‘purple variant’, which consists of around 60 percent tunnel, performs best. Deutsche Bahn and the Austrian Federal Railways (ÖBB) presented the outcome today together with Andreas Scheuer, German Federal Minister for Transport and Digital Infrastructure.

The Brenner Base Tunnel is a 55-kilometre-long railway tunnel under construction through the base of the Eastern Alps beneath the Brenner Pass. When completed (scheduled for 2028,) and connected to the Inn valley tunnel, it will be the second longest railway tunnel in the world with 64 kilometres. The line is part of the important north-south railway line between Berlin and Palermo in Italy, a Trans-European Transport Network (TEN-T) corridor.

The new track is to secure the capacity at the northern approach to the tunnel in the long term. The expectation is that rail traffic, especially freight, will increase when the tunnel is opened. Around 47,5 kilometres and thus the majority of the selected route are in German territory, the Austrian section is around 6.5 kilometres long. The aim is to complete the track to the tunnel by 2038.

The selected 54-kilometre route runs 60 per cent underground. “The variant with by far the highest proportion of tunnels protects people and the Inn Valley in the best possible way”, says Andreas Scheuer, German Federal Minister of Transport. A tunnel takes up less space and should minimise the impact on animals, plants and biological diversity. Next to use of space, protected areas, geology and the water balance were examined for the route proposals.

The now selected route, coloured purple in the proposals, leads from the Austrian Schaftenau via the municipalities of Kiefersfelden, Oberaudorf and Stephanskirchen east past Rosenheim to Ostermünchen. In the Austrian section, the route will be lowered into the valley floor immediately to the east of the planned linkage point Schaftenau and run as a tunnel towards the state border. The cross-border Laiming Tunnel and the Steinkirchen Tunnel are each around 13 kilometres long.

Another 5,5-kilometre long tunnel crosses under the municipality of Stephanskirchen east of Rosenheim. Connection points with the existing railway line are also planned north of Niederaudorf and near Ostermünchen. Reinhold Hödl, Head of Project Implementation at ÖBB-Infrastruktur AG, is satisfied with the present result: “The cross-border character makes the project something very special for ÖBB. The joint search for the best overall route planning has revealed a sensible solution. The cross-border cooperation also worked very well.”

During the entire route development process to date, Deutsche Bahn and ÖBB have paid particular attention to coordination with representatives of the region. The first ‘dialogue forums’ were set up as early as 2015. The working groups continuously and intensively discussed the planning activities and thus made a valuable contribution to the route development for the northern access route to the Brenner Base Tunnel.

In the run-up to the route decisions, the railways invited to 174 working meetings and 33 plan exhibitions in the region. 110 specific suggestions from municipalities, citizens’ initiatives and private individuals have been incorporated into the work for this forward-looking project. A total of 155 people from the project communities in Germany and Austria were involved in the working groups.

The route selection is a first step in the planning process for the northern access to the Brenner. In Germany, the preliminary planning now follows, on the Austrian side the planning for the initiation of the environmental impact assessment is taking place. In this phase, the engineers investigate further optimisations and deal with planning details. DB and ÖBB will continue the dialogue with the people in the region of the planning area in the next phases.

Below you can watch an animation of the chosen route: