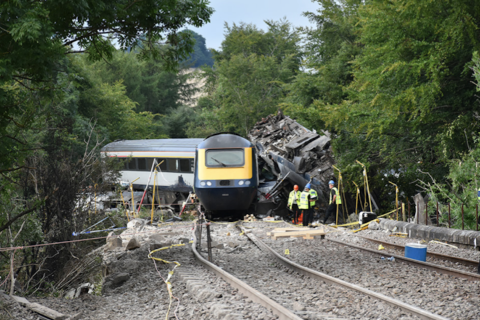 Cab safety measures could see radical changes, and the construction of earthworks near the rails could be adjusted. This is all the result of the fatal accident in the northeast of Scotland in the summer of 2020. The Rail Accident investigation Branch (RAIB) has published a report with twenty far-reaching recommendations, including driver seatbelts and airbags, measures not seen before in the rail industry in the UK.

Scotland and the UK were shocked by a crash in August 2020, when a lightly loaded passenger train derailed at a landslip south of Aberdeen, after an extreme summer storm. The derailment killed a passenger, a train guard and the driver, and wrecked a train set only recently commissioned for ScotRail, the regional passenger operator. The RAIB, the official watchdog in the UK, has been detailed in its response and put forward fully twenty critical recommendations in its report published today.

The circumstances of the accident were framed by a severe storm that had disrupted services across the country in the previous twenty-four hours. The derailed train was among the first to attempt movement after the rain and several flooding incidents. The point of the derailment was in a deep cutting, over a century old, and only recently upgraded in the past decade.

Modelling undertaken by the engineering consultancy AECOM, working on behalf of RAIB, indicated that the design of ten-year old drainage system at Carmont would have been capable of safely accommodating the flow of surface water that occurred on the morning of 12 August 2020 without causing gravel to be washed away down the steeply sloping trench towards the track.

However, as highlighted in the safety report,
the company that was contracted to construct the drain, Carillion, did not undertake construction in accordance with the designer’s requirements. Consequently, the drainage system was unable to perform as intended during the storm of 12 August 2020. This was an extreme weather event, which became the subject of much media reporting at the time, and led to questions being raised about the ability of national infrastructure to cope with the demands of increasingly frequent abd violent weather that climate sciinetiests say we can expect in the rest of this century.

The most significant difference between the original design of the drainage system and the final installation was the construction of a bund (an earth barrier) running across the slope towards the railway and perpendicular to the drain. This bund, which was constructed outside Network Rail’s land, had the effect of diverting a large amount of water into a gully so that it all reached the drain at the same location, thereby increasing the propensity for washout of the gravel infill. RAIB found no evidence that the construction of the bund was notified to Network Rail or the designer.

Much of the RAIB report and findings are critical of the apparent disconnect between contractors and the ‘end-implementer’ – which in most fo the twenty findings is Network Rail. Carillion, which may have been held culpable in other circumstances has since been liquidated. The firms collapse was widely reported at the time and caused major upheaval in a number of national infrastructure projects, including many rail network operations.

Of critical interest to the freight community are the findings which place concerns on the level of safety in the rolling stock involved. The train was a recently refurbished and repurposed “High Speed Train” – a diesel unit of 1970s vintage which, until recently, reminded the mainstay of express passenger services on both the Great Western Main Line between London and South West England adn South Wales, and on the East Coast Main Line, between London and Edinburgh and northward to Aberdeen where, in tragic irony the accident took place. The HST sets are expected to remain in service for some years to come, both as regional passenger trains, as high-speed light logistics carriers.

More radically, the report highlights the death of the driver, and the part that may have been played by enhanced cab safety measures. The RAIB has raised the issue previously, but puts forward the proposal for measures such as seatbelts and airbags to be reconsidered.

The possibility of retro-fitting cabs with such devices may be difficult to question on a purely safety concern, but the implementation of any such measures would be much more of an engineering challenge. However, given the list of concerns raised over this thankfully rare fatal accident, the debate is very much back on the agenda.