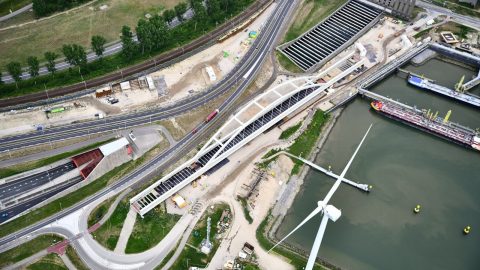 New route to Rotterdam successful, but harbour line not there yet

The port of Rotterdam is celebrating 10,000 trains passing through the Theemsweg route, which opened a few months ago. The new line, constructed explicitly to improve the port’s rail freight operations, seems like a great success. However, representatives from the Dutch rail freight industry warn that there are still obstacles to overcome.

The Theemsweg route opened in early November 2021, after a six-day closure of Rotterdam’s harbour line. The route is a more than four-kilometres long viaduct with two arched bridges running from Merseyweg all the way up to Moezelweg via Neckarweg.

The new route replaced the outdated Caland Bridge, which caused disturbances to rail freight operations since it had to open several times per day to allow ships to pass. Initial estimations from the port of Rotterdam claimed that the new route would increase the rail freight capacity from 90 trains per day to 230.

A success says the port

“The four-kilometre-long stretch of Rotterdam harbour railway line that opened three months ago – is a success. Some 10,000 trains have already travelled along the section without any disruptions or delays”, said the port of Rotterdam. The number of trains might not have reached the estimated 230 per day, as train trips range around a hundred per day. However, the Dutch port considers the three-month operation period valuable since rail freight traffic remains unhindered for the greatest part.

More and easier freight train operations positively contribute to the Dutch green transport goals. “We are committed to the European sustainability goal of transporting 50% more freight over the Dutch railway system within ten years. This goal can only be achieved with a well-functioning rail link”, mentioned Boudewijn Siemons, COO at Rotterdam’s port authority, referring to the Theemsweg route.

“The Theemsweg route is undoubtedly a quality improvement for rail freight transport in the Netherlands since operations are no longer hindered by the often defective Caland Bridge and its frequent openings”, underlined Hans-Willem Vroon, director of interest group RailGood.

“Despite this great success, we are not quite there yet”, he added. This is because of the increased disruptions in Rotterdam’s harbour line in 2021, which exceeded the number of disruptions in 2020 despite the new route.

If you also consider the late scheduled train-free periods in the port due to construction or maintenance, which affect the scheduling of rail freight operations and customers, it’s clear that there’s space for improvement. “It’s great that the port of Rotterdam is celebrating this success, but let’s also stay level headed”, concluded Vroon, urging all parties involved, the port and ProRail, to work more intensely on asset management and capacity distribution.