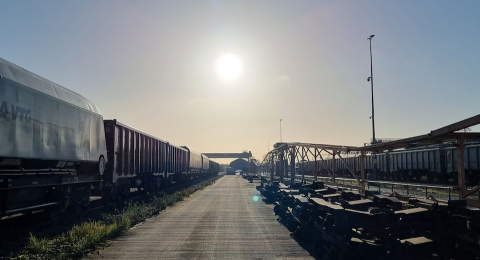 A ground-breaking design incorporating retractable overhead electric traction could be the answer that the UK rail freight industry has been waiting for. A collaboration between Swiss-headquartered engineering specialists Furrer and Frey, aggregates company Tarmac, and operator GB Railfreight will demonstrate in mid-March what will be the first electrified last-mile operation for the UK network.

Wellingborough Aggregates Terminal, operated in the Northamptonshire market town by Tarmac, has been chosen as the demonstrator site for Furrer and Frey’s unique overhead system. GB Railfreight’s available fleet of electric locomotives allows them to be the first rail freight operator under the wires – or rather under the rigid and retractable power delivery system.

The collaboration heralds a potential broader adoption in the UK Railfreight industry. “We have been building our demonstrator at Wellingborough depot with GB Railfreight and Tarmac’, says Noel Dolphin, Head of UK Projects at Furrer and Frey, in his recent post on social media channels. “We’re building to show you can load/unload freight trains on electric roads for end-to-end electric traction, where it can be retracted to allow unloading”.

The choice of Wellingborough was, according to Dolphin, made for forward planning. “Not only will one day it will be on a fully electric Midland Mainline, but it is also a hive of activity loading trains for HS2 amongst others”, he said.

From Dhaka to Wellingborough, via Bern

According to Dolphin, electrical infrastructure installers SPL Powerlines UK have “been doing a great job with construction for us.” He also points to cooperation from the UK government agency the Department for Transport (DfT) and Innovate UK, the non-departmental government-backed specialist support agency.

Furrer and Frey are not new to the concept. Their Bern head office has deployed their technology around the world. “At the Dhaka Mass Transit depot in Bangladesh, we successfully installed our globally tried-and-tested system and its accompanying control system on two tracks”, says a company statement. “An overhead conductor rail with two sections, which can be swivelled against the wall one after the other, has been installed on both tracks. The system can be controlled from an operation panel on each track. The central control cabinet is also equipped with a touchscreen that provides real-time information about the system state and displays helpful messages in case of any failure.”

The more robust environment of a UK aggregates terminal will be a different challenge for the system and the company. Dolphin explains that the Furrer and Frey installation would not be deployed over an entire yard. It is not so much the last mile as the last few yards that count. “[The] kit only goes in at the point of loading, [the] rest of yard and connections would be conventional electrification”, he explains.

It’s expected that GB Railfreight will deploy one or more of their class 92 electric locomotives as part of the demonstration. The carrier uses the class for heavy goods work and is also deployed on their contract to haul Caledonian Sleeper passenger services between London and Scotland. A public demonstration is planned for mid-March.