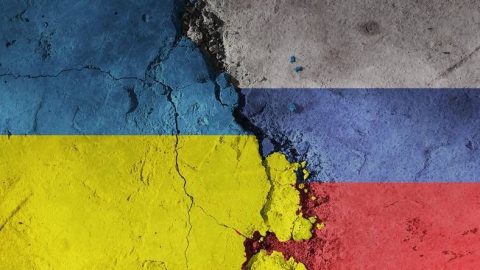 On Thursday 24 February, Russian military forces launched attacks on multiple fronts in Ukraine, among others the cities Kramatorsk, Charkov, Odessa en Kiev. Some of these regions play an important role on the New Silk Road. In this blog, we keep track of all rail freight related news in relation to the war in Ukraine.

Ukraine attempted to re-establish its position on the New Silk Road during the past few years. Following the beginning of the Donbas war with Russia in 2014, the eastern European country tried hard to gain the trust of the rail freight market and attract traffic volumes to its territories.

The attempts started to be fruitful as more and more companies examined transiting through Ukraine and implemented new routes and services. According to RZD Logistics, transit through Ukraine accounted for 2 per cent of the westbound container traffic volumes on the New Silk Road in 2021. This number increased compared to 2021, proving the country’s growing importance.

On top of that, Chinese president Xi Jinping underlined Ukraine’s importance for China’s BRI in January 2022. In a note he sent to the Ukrainian president, he underlined how important the “development of the China-Ukraine strategic partnership was to his country and the Silk Road, respectively. With war erupting between Russia and Ukraine, the situation is overturned, leading to a new status quo. We are following closely all the relevant developments.

This blog is closed, for further coverage of the situation in Ukraine you can follow the news on the website.

16.30 – DB Cargo Eurasia has sent out a notice to its customers, as well as DB Schenker. They message is similar to those of other operators: traffic through Ukraine is currently not possible, but the main route remains open for traffic.

15.45 – Silk Road companies are doing their utmost best to assure customers of the safety of the main China-Europe corridor via Belarus and Poland. One such company is the Chinese operator New Silk Road Intermodal from Sichuan. “In the last few years we did not use Ukraine as a transit country because of the local situation, Belarus and the Baltic states were always our first choice. In addition, the rail route is so important for China and Russia that we will do everything we can to assure that no train to Europe is affected by the situation in Ukraine”, it said on Linkedin.

15.30 – RailCargoGroup (RCG), the cargo subsidiary of the Austrian ÖBB, has also commented on the situation. “Currently, there is no impact on RCG’s goods transports. We are monitoring the situation closely and can react to changes in the flow of goods with alternative routes if necessary. At this point it is too early to assess concrete effects or to report on possible measures, as the situation can change rapidly. Rail freight transports to and from China are also not affected at this moment (alternatively via Belarus or Turkey).

15.15 – Sanction lawyer Yvo Amar said in Dutch news show RTL that he expects the sanctions proposed to have an effect on the export of cargo, whereas current sanctions are mostly impacting financial transactions. “This will have an impact on companies dealing with or in Russia.”

He also said that although sanctions are already in place on financial transactions with Russia, they will be more strict, and also include more countries. “What you see now, is that the list of countries imposing sanctions on Russia is expanding, for example with Singapore, South Korea, Australia and Canada. It remains to be seen if China follows suit. For now, Russia is still able to do business with China”, he said in an interview with the broadcaster.

15.00 – Apart from services and business rail companies also focus on their personnel. For instance, LTG Cargo, the subsidiary of Lithuanian Railways that also has a Ukrainian branch-LTG Ukraine- said in a LinkedIn post that it is in close contact with its Ukrainian colleagues and will provide assistance to them and their families. “If necessary, we will help you to come to Lithuania and settle here. We’ll see what else we can do to help,” mentioned the company.

14.45 – Neptune Logistics has written in a communication to its customers that train traffic via the Polish border of Hrubeszow via Izov (Ukraine) and arriving in Swavków (Poland) is completely suspended. Trains arriving via other countries in Ukraine are suspended too, it notes.

It adds that trains via the main route Kazakhstan – Russia – Belarus are running as usual, although congestion at the border between Poland and Belarus may increase due to the rerouting of trains that would normally pass through Ukraine.

13.40 – Sanction update: On the other hand, Japan initiated its own sanctions on Russia, including banning the issuance of Russian bonds in Japan and freezing the assets of certain Russian individuals and restricting travel to Japan. Travel restrictions are especially interesting since they could also apply to transport broadly disturbing connections to Russian Far East ports and the New Silk Road.

13.30 – Sanction update: So far, the US, UK, EU, Australia and Japan have imposed strict sanctions on Russia following aggression towards Ukraine. The US and UK focused mainly on financial sanctions that include transactions, banks and individuals.

The EU updated its sanctions on Russia this morning stating the following:

13.00 – HHLA held a press conference at 12.00 to announce that the port of Odessa was closed today by the Ukrainian authorities, and therefore operations at the HHLA terminal in Odessa have also been suspended. “Except for the security staff, all employees are now at home. Their safety is our highest priority”, the operator says.

12.16 – Chinese companies have also provided their input regarding the Ukraine-Russia situation and the continuation of New Silk Road services. The direct train from China to Kiev is still up and running, however, the service between Xi’an and the Ukrainian city of Chop will be rerouted temporarily through Poland. Read the full article about the reaction of Chinese companies here.

12.05 – “Lithuanian logistics companies are facing a hard day due to the situation in Ukraine,” informed RailFreight.com Tomas Jankauskas from ACE Logistics. Transit to and from China is not disturbed yet. However, the industry fears delays on the Belarusian part of the Silk Road. This is because Belarusian Railways might prioritise the transport of military equipment over containers.

On another note, the Lithuanian government has already declared the country in a state of emergency. Jankauskas mentioned that “based on the EU sanctions that are currently prepared, we could see rail traffic between Lithuania and Russia heavily disturbed since European leaders are working on a full ban on Russia”.

11.20 – Although trains can technically continue to run, it seems that sanctions eventually affect the rail freight industry in real terms. The EU today proposed a package of massive and targeted sanctions, to European leaders for approval. With this package, it will target strategic sectors of the Russian economy by blocking their access to technologies and markets that are key for Russia.

11.15 – In response to a query from RailFreight.com, UTLC ERA says that non of its services has been impacted. UTLC ERA operates the majority of the rail freight services on the broad gauge network, including Kazakhstan, Belarus and Russia.

11.05 – According to Metrans, rail freight services through Ukraine have been paused since January, when instability in the region started. “At least our customers have all cancelled their shipments through Ukraine. In the end, it is the decision of the customer, and most are currently not OK with the transit through Ukraine.”

But, Koubek explains, it is not only about Ukraine. “There have already been customers with headquarters in the US as well as the EU that are now refusing to transit through Russia, and therefore refusing to use the train. This is likely to have a much bigger impact on rail freight traffic on the New Silk Road.”

10.55 – Lithuania and Moldova are also ready to declare a state of emergency.

10.38 – RTSB confirms that customers have cancelled their bookings on trains via Ukraine. No trains transit through this region at the moment, according to the operator on the New Silk Road. Trains are redirected via Belarus and Kaliningrad. Rail freight traffic still runs through these border crossings, says Aleksander Baskakov, CEO RTSB Russia.

10.25 – According to RZD Logistics, there is currently not much of an impact yet. But as the situation is volatile, this can change by the day, says Yulia Kosolopova. “Yesterday evening, the situation was completely different from today, and maybe tonight I will give a different update. But at this moment, freight trains are running. However, people are worried, and train redirections could be a result of that.”

10.05 – Hungary seems to be one of the countries bearing the brunt of the war. According to Jakub Walcak from C.H. Robinson, trains to Budapest that run through Ukraine will be redirected via Malaszewicze, starting today.

This was also confirmed by the platform company in Xi’an, which announced on Wednesday that it had redirected its Chop-Budapest train to Mala-Budapest for the time being.

10.00 – The Ukrainian Railways have entered the emergency operation mode and coordinate all actions through their operational headquarters in collaboration with the government. The operational headquarters were established to ensure the continuation of services under the unique conditions of a war zone – a status that Ukraine seems to have acquired since the early morning of 24 February.

The current operational situation of China-Europe Railway is not affected by the current developments in Ukraine.
We are monitoring the situation closely and in constant exchange with all our partners as well as the German authorities.