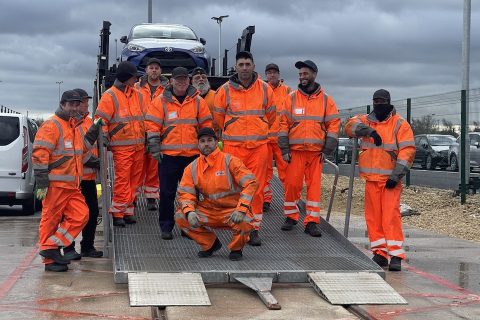 STVA, the UK subsidiary of Groupe CAT, has a long-standing relationship with DB Cargo UK. The new loading facility at Toton offers both partners an efficient means of moving finished products around the markets. The new facility also benefits their joint customer Toyota UK, who manufacture for the European market from factories in nearby Burnaston, and import from Europe to the UK, both via the Channel Tunnel.

Following a series of successful trial runs, fully loaded trains carrying approximately 260 vehicles operate twice a week between the two locations. According to the carrier, the transfer used to take five days by road now takes just 24 hours by train and reduces carbon emissions by 2,300 tonnes every year.

On the outbound journey from the UK, the new generation of hybrid Corollas manufactured at Toyota’s Derby plant are exported to France. Toyota Use the return leg to import Aygo and Yaris ranges, ensuring full utilisation of the new services.

“The commencement of the services was a significant milestone after months of collaboration and construction by all parties involved”, said Roger Neary, chief sales officer for DB Cargo UK. “It’s a win for all those involved and will see us deliver an efficient and environmentally-friendly rail logistics solution for one of the world’s biggest automotive manufacturers. It has also seen us breathe new life back into a previously disused area of our strategic Toton site.”

The 2,6 million pounds investment (3,1 million euros) has seen the construction of a new vehicle storage compound, along with associated loading and unloading facilities. Over 800 metres of new track has been laid, and 1,100 metres of road has either been newly constructed or widened to accommodate the car transporters now taking the Toyota vehicles to and from the site.

Steve Reynolds, managing director of automotive logistics specialists STVA, the UK subsidiary of French-owned Groupe CAT, said this terminal represents the tangible outcome of four years’ work. “To facilitate the project, we have signed a long-term lease with DB Cargo UK for the Toton rail terminal and have invested more than 3 million pounds [3,4 million euros] to refurbish our wagons.”

Each train will carry the equivalent load of around 29 road transporters, said the partners, who have also redesigned key aspects of their wagons, future-proofing them for the next generation of cars and quality expectations from Toyota. The partners also recognised the collaboration from Eurotunnel, the UK Border Force and the Department for Transport within the UK government.