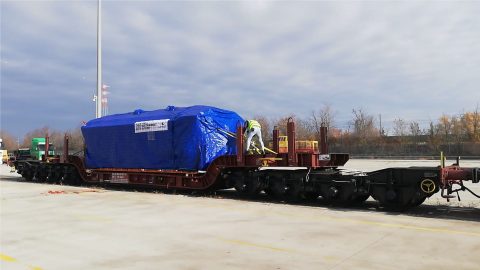 In the picture: 82-tons piece spotted on a freight train

Every now and then something unusual is seen on a train, such as this week. DB Cargo moved a 82-ton-weighing object by train from Italy to Germany, giving it a ride to its final shipment towards Finland.

“On it’s way to Finland we moved this 82-tons piece from Italy up to Lübeck”, writes André
van Dam, expert Exceptional Transports and Projects by Rail at DB Cargo on Linkedin. In Lübeck, the object will be shipped by vessel to Finland. “It is the second in a series of six shipments for this customer. The rest will be transported in the months to come.”

So, what is in the odd-sized, wrapped in blue plastic object on this train? That is not a secret, reveals van Dam. “This is a so-called Halb-Motor: an engine block under construction, consisting of the base with the cylinders and the crankshaft. Once the other components have been added in Finland, the engine is ready to be delivered.”

The shipment is a typical example of project cargo: cargo that cannot be transported in a container. Ocean and inland shipping are the most used transport modes, as these are the modalities with least limitations. But, as this shipment proves, it is not uncommon to ship project cargo on the train.

DB Cargo regularly ships project cargo, although it is a niche market, the operator admits. There are certain limitations rail deals with, such as track width, tunnels and stations. At the same time, rail is faster than sea shipping. In most cases, it comes down to a multimodal connection, with rail taking responsibility for a large portion of the transport.

1 comment op “In the picture: 82-tons piece spotted on a freight train”

Some years ago we could see those transports in Stockholm on their way to and from Finland.
Are the engines now transloaded to ship/ferry in a German Baltic port?