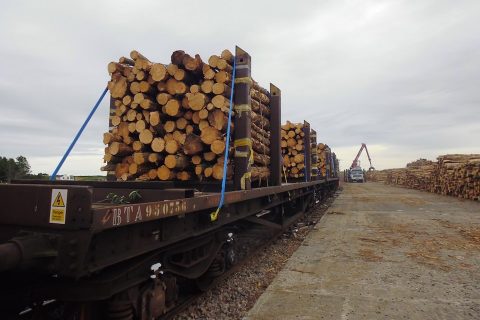 UK timber extraction by rail lags behind European practice, but campaigners propose changes that would help redress the balance. Major reserves on the border between England and Scotland are maturing, and environmental and legal considerations are challenging the current preference for road delivery. The industry, however, has yet to be convinced.

Rail campaigners have polled the timber industry over the increasing traffic from Kielder Forest. The vast plantation that straddles the England and Scotland border. The region was previously served by a main line railway that the campaigners say should be reinstated to help make production from the plantation as low-carbon as possible.

Following on from successful trials last year in the north of Scotland, and with further proposals tabled for this year, the Campaign for Borders Rail has been lobbying the timber industry to advocate rail as the preferred means of extraction at Kielder. The plantation was initially served by a network of railway lines, closed in a rationalisation in 1969. As part of the drive to reinstate the line, campaigners have been advocating utilising the line to support a more environmentally friendly timber extraction programme.

The Campaign for Borders Rail freight representative, David Hammond, says that according to the two industry bodies, Forestry England and Forestry and Land Scotland, the equivalent of approximately 55 lorries per day bring timber out of forests in the Kielder area and the adjoining Scottish forests.

Hammond points out that last year’s Caithness timber trial in the north of Scotland, three trains a week replaced approximately 250 heavy truck movements. “If a significant proportion of the Kielder and district output were to use rail instead of road, it would provide substantial business income for the lower section of the reinstated line as well as benefiting the general economy of the area”, he said. “There is already a rail distribution point for timber at Carlisle.”

A net-zero economy by 2050 is already on the legal statute in the UK. That means significant changes will be required in the heavy haul industry. Rail freight has already begun addressing the issue, with electric traction on the rails. The setback of energy price hikes, which forced some operators to think again, is not expected to be a long term issue.

Currently, the bulk of the timber is in the form of round wood and saw logs transported to sawmills, pulp mills and panel mills. Hammond’s research shows several manufacturers are already using Kielder timber. These include the BSW sawmill in Carlisle, while in North Wales, there is Eren Paper in Shotton manufacture cardboard and packaging, and Kronospan in Wrexham, who are involved in the wood panel and laminate manufacture.

Kronospan already uses rail to transport raw materials from Carlisle – a three hundred mile round trip (480km). Hammond says that in 2020 they emphasised their long-term commitment by ordering a further 100 rail wagons to carry timber across their European operations. “The demand for wood and wood products is forecast to continue to increase. There seems no doubt that the need for suitable timber transport will be long term, considering
the extent of new and replacement planting taking place now and planned for the future by both
governments”, says Hammond.

Kronospan also has timber railed in from Baglan Bay in South Wales but on an irregular basis! It’s a pity more timber isn’t carried in the UK !! Shameful in fact when you see huge trucks full of timber on narrow roads in Cornwall and Devon heading east when there’s a parallel railway line practically devoid of any form of rail freight at all!! There was a recent Newton Abbott – Abergavenny timber trial which is a step in right direction ,if it becomes a regular flow.

I note the lengths of logs being laboriously transferred by grab

I’ve also looked at demolition & excavation with the idea that a regular 20ft module could switch a lot of this & timber traffic to intermodal with speed, & safety gains

A ½ height box can replace a 32T 4-axle rigid tipper truck, recognised by DfT reports as most destructive vehicles for road pavements, but also an appalling per vehicle per year kill-rate