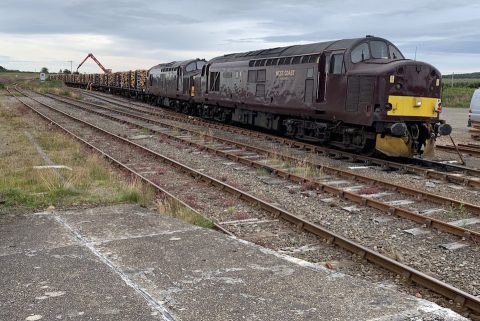 Trails have successfully begun to move timber by rail in Scotland for the first time in over a decade. The southbound flow originates at Georgemas Junction, and has potential to breathe new life into Scotland’s Far North Line, and on sparsely populated lines elsewhere. The first train ran this week, carrying a consignment from the small terminal to Inverness, a distance of just under 150 miles (240 kilometres).

Victa Railfreight, specialist freight train operators and industry support service providers, has received a grant of 195,000 British pounds (just under 220,000 euros) from the Scottish Strategic Rail Freight Fund. The government cash will help underwrite an operational trial to move around one thousand tonnes of raw timber per week for the next six weeks between the small Caithness terminal and customers in Inverness, understood to be principally the wood products manufacturer Norbord, who have already expressed interest in permanently re-establishing their own railhead.

The Strategic Rail Freight Fund was established last year by the Scottish government. The 25 million British pounds (28 million euro) ring-fenced purse is designed to help stimulate rail and modal shift over the next five years. “We have worked closely with the timber and rail freight industry to explore opportunities for modal shift and I am delighted to confirm funding for this rail freight trial which will remove around 250 lorries from our busy roads”, said Michael Matheson, the Scottish government’s cabinet secretary for transport.

“The trial will help to demonstrate that the movement of timber in Scotland by rail is possible as well as efficient”, added the cabinet secretary. “It will provide confidence to both the timber and rail freight industries to develop permanent and sustainable solutions to meet market needs. It is good news for the timber and rail freight industry, for the Scottish economy and for the environment.”

The trial has been widely welcomed across industry, and the community at large. Alex Hynes, who manages the passenger operator ScotRail said it was brilliant news for rail freight in Scotland. ScotRail run four daily return services along the length of the sparsely populated single-track line, along with some commuter services around Inverness. The southern end of the line is also shared with services to the West Highland coastal settlement of Kyle of Lochalsh. The 63-mile (102 kilometre) branch also has potential to reactivate timber traffic. Under the current trial, up to three timber trains each week will share the line.

Neil Sime, who is the managing director of Victa Railfreight, stressed both the commercial and environmental benefits. “Victa is delighted that the Scottish government has provided substantial funding so that we could bring together rail freight and timber industry partners to enable this collaborative trial of moving timber by rail to happen”, he said. “We hope that it will lead to further movements of timber by rail across Scotland, providing greener solutions and reducing damage to sensitive rural roads.”

The precarious passenger proposition of the Far North Line has been undermined by continual upgrades to the A9 highway, which serves the largest communities by a much more direct route. However, with long-distance trucking a target for carbon reduction, and with forestry a widespread industry in Scotland, there are other commercial operators and communities watching the trials with interest. If successful, then other stops on the Far North Line could be activated.

Timber production and processing necessarily takes place in sparsely populated areas. Timber freight can help to support rail infrastructure in such circumstances, and take pressure off narrow rural roads. Other routes in the South and West of Scotland have historically carried timber traffic. Bulk timber trains are also a foundation of the case put forward by campaigners seeking extension of the Borders Railway, which would serve Kielder Forest, one of the biggest man-made plantations in the UK.

Georgemas Junction, which serves Thurso and Wick, the two most northerly rail termini in the UK, is an active centre for freight and maintenance operations. In addition to these forestry trials, the location also from time to time serves the offshore energy industry and the decommissioning of Dounreay nuclear research reactor.