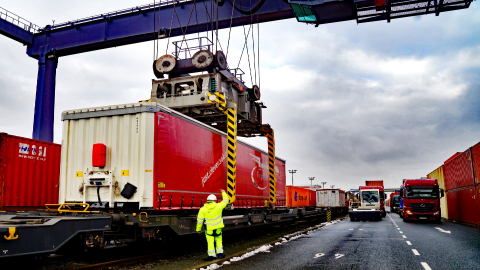 A new connection offered by German company Kombiverkehr in collaboration with TFG Transfracht will link Nuremberg in Germany and Rotterdam in the Netherlands. The service will run between the TriCon container terminal and Rotterdam Cobelfret terminal with five weekly roundtrips. Trips commenced on Thursday 13 January.

The new rail freight product is a response to limited cargo space and the shortage of truck drivers. “With the new continental train service, we are giving our freight forwarding customers a clear answer to the scarcity of resources in terms of loading space and truck drivers, which is currently not only found on this corridor in continuous road freight transport,” explained Alexander Ochs, managing director of Kombiverkehr.

For Kombiverkehr, this is the third terminal in Rotterdam included in its network. Cobelfert terminal is positioned in Rotterdam Botlek and operated by the company C.Ro. Apart from Cobelfert, Kombiverkehr has frequent connections to Rotterdam’s RSC and CCT terminals. As for the TriCon container terminal in Nuremberg, it is a trimodal terminal allowing for transhipment between road, rail and barge.

Connection to the UK and Ireland

Besides connecting Nuremberg and Rotterdam, Kombiverkehr can guarantee cargo forwarding towards the UK and Ireland. Specifically, shipping company CLdN Cobelfret SA can connect the port terminal in Rotterdam to the destination ports in London, Dublin, and Killingholme (Immingham docks) with ferry services. “Depending on the target region, we design our intermodal trains in such a way that a direct changeover to other modes of transport is possible without having to be rerouted. To realise end-to-end UK transports, we have also succeeded in doing this with the new Cobelfret product with attractive cut-off times for acceptance and unloading,” concluded Ochs.