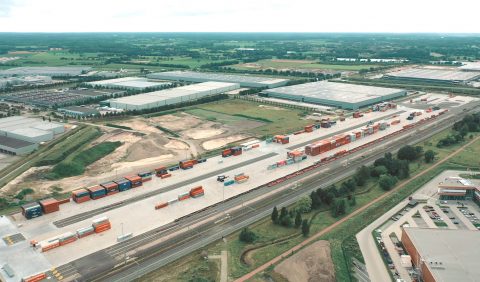 Kombiverkerh is expanding its rail freight services on the Rhine-Alpine corridor. From 6 September, the trains that run from Mortara in the north of Italy to Germany, the Netherlands and Belgium will have an increased number of departures. Moreover, the Dutch hub of Venlo will be added to the network.

The intermodal operator announced that the shuttle between Mortara and Krefeld and between Mortara and Rotterdam CTT will make five round trips a week in total. The Mortara – Ghent route will be boosted from five to six weekly train departures in each direction. There are to be eight weekly round trips on this route from January 2022.

Also in September, the terminal in Venlo, the Netherlands, will be added to the Benelux/Italy connection with five departures a week in each direction. This will be from 9 September, with trains received and dispatched at the Cabooter Railterminal in Greenport in Venlo.

“With the addition of the Cabooter Terminal in Greenport Venlo, we are gaining access to one of the strongest business and logistics locations in the Netherlands with an excellent multimodal transport infrastructure that is in very high demand from customers”, explained Peter Dannewitz, head of sales.