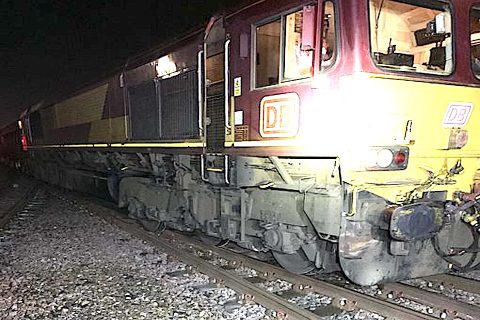 A low-speed derailment in southeast England disrupted Thursday’s commuters and other rail services in and out of London St Pancras, the terminal for Eurostar. The disruption lasted most of the day. A class 66 diesel, the workhorse of freight operations in the UK, came to grief at Hoo Junction, a critical freight location and also for high-speed “Javelin” services between the coastal Kent towns and London.

A DB Cargo liveried class 66 was derailed at a crossing within the Hoo Junction complex in the early hours of Thursday morning. Pictures released by one of the passenger operators affected – South Eastern – show what appears to be the leading axle off the rails. Network Rail has since derailed the stricken locomotive, and the lines have reopened. The accident occurred at low speed, with relatively minor damage evident.

Sometime before 0600, what appears to be a DB Cargo hauled train (likely an empty aggregates working) jumped the rails while heading east, possibly en route to Cliffe on the banks of the river Medway. Hoo Junction in the north of Kent, where the incident occurred, connects lines along the north course of the county and freight only lines on a peninsula, including a branch to Cliffe, where DB Cargo Uk recent signed a contract to move trains from an aggregates facility on the River Medway.

According to press sources, passenger operator Thameslink was forced to cancel all services through Higham, Strood, Rochester, Chatham and Gillingham throughout the morning. South Eastern, another operator, also runs services on the line. Their high-speed commuter routes nominated Javelin to use the network as far as Ebbsfleet before transferring to the High Speed One Channel Tunnel line for an express run into London. The premium service has successfully operated for many years and opened up new computer markets on the Kent coast.

Network Rail issued a brief statement on Twitter apologising. “We’re’ really sorry to South Eastern, and Thameslink passengers delayed this morning low-speed speed derailment of a freight train at Hoo Junction. One wheel has come off the rails, and some wagons are blocking the downline (eastbound away from London).”

The passenger operators and Network Rail shared several images on social media. Later in the day, an updated statement informed rail users that traffic was back to normal “We’re’ pleased to say the derailed train and the rescue train are now both clear of the running railway lines and normal service can start again. There may still be some delays while we get back on track.”

No injuries were reported, but the Rail Accident Investigation Branch’s safety inspectors will make an investigation as is standard practice.