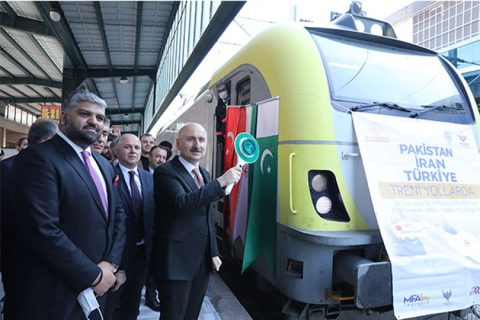 During the welcoming ceremony of the first Istanbul-Tehran-Islamabad train in Ankara, the Turkish transport minister Adil Karaismailoğlu reassured the attendees that the corridor would remain active with the possibility to extend towards Europe.

Karaismailoğlu tried to end the speculation around the ITI train’s longevity by clarifying that it has growth potential that all countries will try to exploit. Most importantly, he explained that the ITI train is now an integral part of Turkey’s international rail freight development strategy, making it, thus, even more difficult to stop it.

Turkey has drawn a quite ambitious strategy to enhance its presence in international corridors. Among its objectives is to increase the international rail freight volumes. The country needs international freight trains arriving from different destinations to achieve that. Understandably, in this context, the ITI train is vital to keep running. “We aim to increase the amount of freight transported on the railways to over 50 million tons in 2023,” emphasised Karaismailoğlu.

“Thanks to hundreds of projects implemented, Turkey has become the key country of international railway corridors and managed to increase its exports by 33 per cent last year,” commented Karaismailoğlu. Additionally, he reclaimed that Turkey aims to operate 1,500 block trains per year through the MIddle Corridor and Baku-Tbilisi-Kars route and reduce the 12-day cruise time between China and Turkey to 10 days.

But are the volumes sufficient?

One of the main concerns regarding the Istanbul-Tehran-Islamabad rail freight service focused on the insufficient volumes that the train carries. On the one hand, Turkey needs the train to reach its goals. Still, on the other hand, Aasim Siddiqui, chairman of Pakistan Freight Association, claimed after the first train departed that the cargo volumes between Turkey and Pakistan are insufficient to maintain a regular train service.

Indeed the first train that departed from Pakistan was a single wagon train carrying covered wagons. However, the second one was a block train, and all 24 covered wagons consisted of the same cargo. This might mean that there are some positive developments in terms of service demand since the main bottleneck with the US sanctions to Iran is partially solved because the train does not stop in the country.

Karaismailoğlu stressed in Ankara that the ITI train will save time and cost compared to the 35-day sea transportation between Pakistan and Turkey and will lead to the development of trade between the two countries. “We aim to make it regular in the process and to provide European connection by crossing Marmaray. We will also try to diversify the transported cargo and develop new corridors including other countries like Afghanistan, India, China and southeastern Asian countries,” underlined the Turkish transport minister.

Do all these plans sound realistic? There are many possibilities for rail freight trade between central Asian countries that do not limit only between Turkey and Pakistan. Additionally, there is a possibility of reaching out to India and creating a new corridor. Such a development would be precious for the global supply chain since India has been looking for a way to enter global rail freight lines for a long time now.

However, one of the main targets that the ITI train should try to accomplish first is probably securing some eastbound volumes from Europe and Turkey towards Pakistan. This would make it easier for the train to have complete roundtrips and open up the way to more distant markets.