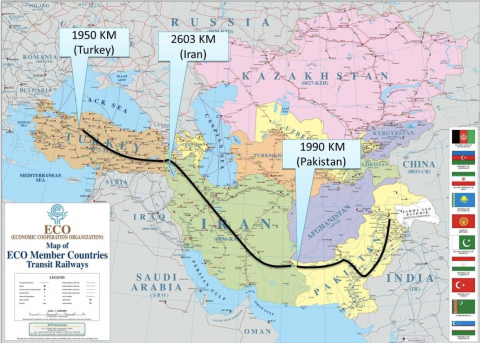 Istanbul-Tehran-Islamabad train departed. Is it real this time?

The Islamabad-Tehran-Istanbul (ITI) railway train finally departed in western direction on Tuesday 21 December. After many failed attempts to resume this rail freight service connecting Pakistan, Iran and Turkey, it now seems that the train is on track. This was reported by several media sites in the region.

The departure was celebrated with a ceremony attended by senior officials of Pakistani railway and the ministry of commerce, the ambassadors of Iran and Turkey, Tajikistan, Kazakhstan, and a representative of the Organization for Economic Cooperation (ECO). Pakistani railways minister Azam Khan Swati said that the start of the container train move from Pakistan to Iran and Turkey was an old dream of the countries of the region, which has come true again.

The fact that the train actually departed, should be the proof of the launch of this train. This launch was otherwise dubious, as it was announced several times this year, and cancelled last minute. The last time it was supposed to depart was on 4 March, but also then it was postponed.

Even the Turkish president reassured at the beginning of March that the train would run. In fact, everything was ready for the ITI’s train trip, with all the administrative, operational and security arrangements being in place. However, at a meeting between the three countries’ authorities on 2 March, the Pakistan Rail Freight and Transportation Company cancelled the service, citing safety-related concerns.

After several interviews conducted by RailFreight.com with the parties involved, it can be concluded that there were two main reasons for the difficulty launching this train. Firstly, U.S sanctions on Iran pose a challenge. As the train passes through Iran, this brings administrative hurdles along.

These hurdles mean that there is a lot of hesitance from shippers to get onboard, and that leads to the second challenge: a lack of demand. According to Aasim Siddiqui, chairman of Pakistan Freight Association, the cargo volumes between Turkey and Pakistan are insufficient to maintain a regular train service. “This is still the case. The train that departed now has some single wagon load cargo in covered wagons, but there are no other departures planned, as there is not enough demand”, he said.

There were many other reasons cited, such as the weight of the cargo, the willingness of the Pakistani government or poor communication. However, all parties now seem to be in line and onboard, as the train has departed for real. And it is likely to arrive in Turkey, Siddiqui added. “It will not stop in Iran because of the sanctions. But the Iranians are quite keen on the movement of this train.”

The railway line has great potential. Initially, it took a train 15 days to make the 6500km journey, and this was eventually reduced to 11.5 days. The train can carry 20, 40ft rail cars. The route has been recognised as an international corridor by the United Nations.

It is foreseen that the railway not only connects these three countries, but also forms a link between Europe and Asia. From Istanbul, there are good connections to Europe and with the use of the Marmara undersea railway tunnel, the delivery could be even faster. The Marmara railway tunnel was recently opened for rail freight traffic, allowing for a faster link between the European and Asian side of the Turkish city.

On the other end, India and Bangladesh have expressed interest to connect to the line, in order to realise a faster transport link to the Middle East and Europe. The ITI train is also called the Eco Container Train.

4 comments op “Istanbul-Tehran-Islamabad train departed. Is it real this time?”

If anyone need information or containers booking for export and Import via rail road
Islamabad -Tehran – Istanbul
Eco Freight Train (ITI)
Feel Free to contact me khisales@maxtelz.com
03172196997
Our next train will be sail on 29 December 2021
I will update you time to time Thank you

Hi Majorie van Leijen, I am an Islamabad based journalist, need your imm contact please.

Is it stull in operation?