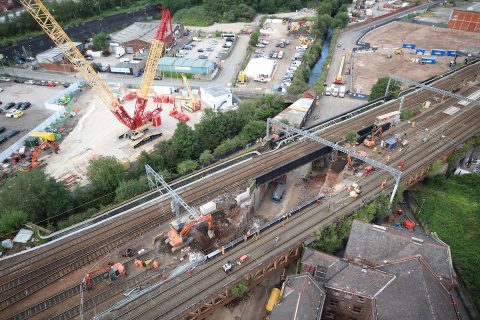 This Christmas and New Year will see a wide-ranging programme of works undertaken in and around Manchester. The government’s infrastructure agency Network Rail is continuing a programme of upgrades, improving capacity and relieving bottlenecks. The work is independent of the disappointing news in the recently published review, which cancelled many capital projects, including the provision of a dedicated high-speed line connecting the region’s major cities.

Manchester is the focus of heavy engineering work across the festive period. So often the subject of conversation over congestion and delay, the network around Manchester and the North of England is piece by piece, being upgraded to improve capacity for all rail users. Engineers are continuing with major track and signalling upgrades to boost reliability, allow more trains to run in future and improve overall connectivity.

Works continue across the New Year

Work in the Manchester area has been scheduled from Christmas Day and has taken advantage of the UK’s extended public holiday. With four days available to engineers, and the early hours of Wednesday 29 December, teams will be upgrading the track in central Manchester in the latest stage of the Transpennine Route Upgrade project. Work will also take place to install new signalling equipment east of Manchester Victoria station (pictured above), which could offer some relief by taking traffic away from the overburdened Castlefield Corridor. Further work will be undertaken between Saturday 1 and Monday 3 January.

While primarily aimed at increased reliability for passengers travelling between York, Leeds, Huddersfield and Manchester, the Transpennine Route Upgrade will also benefit freight users. Network Rail is taking the opportunity afforded by the seasonal suspension of timetabled passenger services to complete the works. However, given the project’s scope, passengers will experience significant curtailments to services right through to Tuesday, 4 January 2022.

Shapps and a Christmas turkey

“These improvements over the Christmas period are a crucial part of the Transpennine Route Upgrade which will better connect the North and allow more trains to run in future”, said Neil Holm, Transpennine Route Upgrade Director for Network Rail. “We’ve planned the work carefully to complete as much as possible on Christmas Day and Boxing Day [26 December]. There are some changes to services over the festive period, but trains are being diverted where possible”, he added, referring to passenger services.

For their part, the government has been quick to call the works a part of their accelerated investment plan, as laid out in their recent, if somewhat derided, Integrated Rail Plan for the North. “We’re forging ahead with our 96 billion pound [110 billion euro] investment to transform rail journeys through high-speed services and major improvements in the North and Midlands”, said Grant Shapps, the Secretary of State for Transport. “These vital works, modernising tracks and signalling, will ensure more services can run far more reliably. I am indebted to all those who will be working hard to deliver these vital works.”

Shapps may have had a roasting for his reported contradictions on capacity and connectivity. However, most observers agree that the works over this New Year are no Christmas turkey.