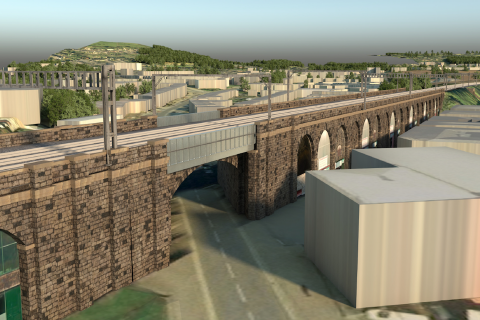 Network Rail plans to radically increase capacity at a bottleneck on a key rail route across the North of England. It is not the notorious Castlefield Corridor in Manchester – yet. The troublesome section in question lies to the east, between the towns of Huddersfield and Dewsbury, where a two-track section would be quadrupled. The works would significantly increase capacity for both freight and passenger services connecting ports and installations on both the east and west coasts of the UK.

According to Network Rail, the UK infrastructure agency, these proposals are part of the wider Transpennine Route Upgrade, which they say will transform journeys between York and Manchester via Leeds and Huddersfield. Freight operators have for many years campaigned for better rail provision on these routes across the Pennines, often called the backbone of England. Many operators and businesses still recall the much criticised closure in 1970 of the so-called Woodhead Route, directly connecting Manchester and Sheffield. That has left the entire region congested ever since.

The eight miles (13 kilometres) of proposed quadruple track would not quite replace that lost route, but Network Rail say it will bring a more modern and reliable railway, and allow more trains to run and better connect the region. They do however emphasise passenger services would benefit in the first instance. Most commentators believe much more needs to be done if freight is to benefit too.

The plans for the Huddersfield – Dewsbury corridor have already been put out to consultation twice, in Autumn 2019 and Spring 2020. Network Rail now want to give the public a final opportunity to view the plans and see how they have developed. The agency says this forms a critical part of the UK government’s 589 million British pounds (649 million euro) plans for the railway network in the North of England. However, there are still questions over the provision of freight capacity.

In their recent members’ newsletter, the Rail Freight Group (RFG), representing the industry at large, welcomed the government’s announcements that improved freight capacity and electrification is to be developed as part of the Transpennine Route Upgrade. However, they say that an integrated plan will not be delivered until December, and aspects of the project are already underway, including this upgrade.

The RFG are urging government ministers to ensure that freight enhancements to deliver capacity, along with  gauge clearance works, are accelerated to ensure they can be delivered as part of the already committed scheme. They say ports and businesses across the North of England have been working with RFG to make the case for improved rail freight links on the Transpennine routes.

“We are pleased to see government has listened to businesses who have clearly set out their aspirations to use more rail freight as part of their distribution networks”, said Mike Hogg, RFG Northern representative, in a statement. “This project is vital in ensuring that those companies can deliver for the economy of the North, whilst also decarbonising their transport links.”

Extra demand has not been considered

Concerns exist that a number of factors are not being fully considered, and that new infrastructure may not have sufficient capacity to meet demand, particularly demand arising from the new government-mandated decarbonisation agenda. Maggie Simpson, RFG director-general said businesses across the North were eager to integrate rail into their distribution networks. “Government must keep the pressure on and move from development to confirmed delivery as soon as possible”, she said.

Extra demand could be expected from a number of sources. Ports in the North, such as Liverpool and Humberside, are predicting post-Brexit traffic levels to increase as trading patterns change, and the South becomes mired in customs delays. On Teesside, the former steel towns of Middlesbrough and Redcar are both diversifying their former industrial bases, and the development of new facilities, such as Port Salford in Greater Manchster, are all expected to generate freight traffic.

Reinstating the former freight lines along the Huddersfield – Dewsbury corridor is, critics say, a good start. They do however also say they must be seen as just the start of something big, and not the only upgrade delivered for the region.