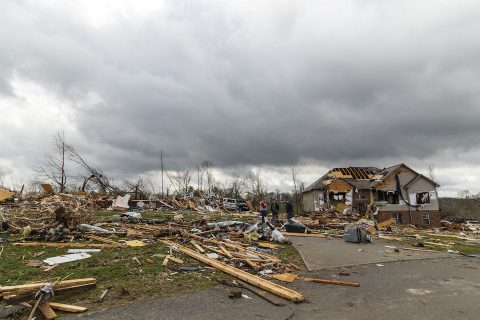 A freight train has derailed in Kentucky, USA over the weekend. The serious derailment in the town of Earlington, in the mid-western state of Kentucky, was just a footnote to the devastation brought about by a series of tornado storms that broke all-time records for severity.

The derailment of a CSX mixed goods train would have been headline news in any other weekend. The train, conveying a variety of bulk loads, was blown off the rails in the middle of the small settlement – where the single track line, as is common in America, runs directly through the centre of the town.

All stop at the sound of sirens

When the forces of nature are powerful enough to lift massive American freight cars off the tracks and threw them through the air, there is little that can be written into the safety case to avoid in inevitable. That is just a fact of life for operators hauling loads through tornado alley in the mid-western United States.

Normal operating procedures call for an immediate stop in the face of a tornado warning. It appears that one CSX service was unfortunately caught out in the eye of the storm. The sirens sounded in the small settlement of Earlington, about one hundred miles (160km) north of Nashville. A well-rehearsed population headed for their shelters as the lights on highways and the town’s single track freight line turned red.

What happened next is the stuff of a Hollywood disaster movie. The train slowing to stop, ran into the teeth of the most powerful storm system ever recorded in Kentucky. Not surprisingly, details are still sketchy, but it’s understood that at least one car was lifted off the tracks and crashed to ground more than 70 metres away. Another vehicle crashed through a residential property, and a further 25 cars were derailed.

Mercifully, the cargo was not volatile. Thoughts return to the derailment in Llangennech in 2020. Given the location, any sort of conflagration as there was in Wales, would surely have been catastrophic. As it stands, there have been no reports of injuries as a result of the incident. Sadly, the storms have been responsible for many fatalities as they ravaged across six states.

Local news paper, the Kentucky Courier Journal, published over two hundred pictures of the aftermath. Pictures published on social media show the extent of the derailment and the damage to the town, with almost every structure completely destroyed. The governor of Kentucky State, Andy Beshear, has taken the immediate move of establishing a disaster fund to help with the immediate needs of those severely affected by the storms.