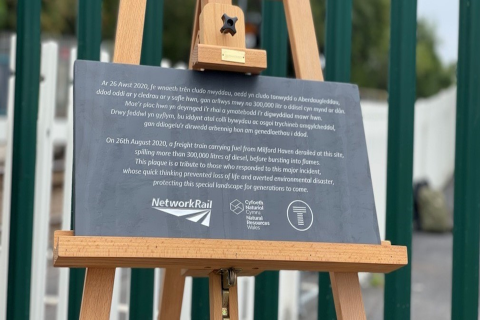 One year since Welsh freight derailment

Agencies, including Network Rail, have come together to thank the community around Llangennech in South Wales. The town was the site of a derailment and fire in August last year, which necessitated the evacuation of several hundred residents, and brought about a huge combined operation to mitigate extensive environmental damage.

The plaque was unveiled at the western Wales village train station by representatives of those involved in the recovery operation. This includes Network Rail, Natural Resources Wales, Transport for Wales, Adler and Allan, British Transport Police – who represented all emergency services – and elected representatives Nia Griffith, Labour MP for Llanelli and Councillor Gwyneth Thomas for the Llangennech ward.

A train bound from Milford Haven to Reading derailed and caught fire while passing through the community. Around 300 residents were evacuated from their homes by emergency services on the night of the incident. The blaze took firefighters almost two days to extinguish. Although no one was injured in the incident, the derailment happened at a site of international environmental importance, causing major concern for the surrounding waterways and wildlife.

An extensive environmental recovery operation followed, led by Natural Resources Wales. Six months later, 30,000 tonnes of fuel-soaked soil had been excavated from beneath more than 150 metres of railway track – preventing lasting environmental impact and protecting the local landscape. The railway re-opened in March 2021, following the installation of a brand-new track and signalling equipment damaged in the incident.

The plaque, made by Llanelli stonemason, Ben Thomas, of The Slate Workshop, will be kept in safe storage until it can be permanently positioned at Llangennech Station. Bill Kelly, Wales and Borders Route Director at Network Rail, said it was important to recognise the part everyone played in responding to the immediate aftermath of the derailment, the massive environmental recovery operation and the restoration of the railway.

“We must also remember how frightening this was for the people locally who, despite being uprooted from their homes, rallied around, provided food and shelter through the toughest of times”, said Kelly. “The community showed incredible bravery, support and patience. One year on, we have returned to say a huge thank you to them.”

Natural Resources Wales, the government-appointed environmental agency, considered this the biggest marine incident since the sinking of the fuel tanker Sea Empress in 1996, which was coincidentally docking at Milford Haven, the origin of the ill-fated train. They continue to regularly monitor the environment, track progress, and ensure the marine life harvested from the tidal inlet remains safe.

Martyn Evans, NRW Head of South West Operations, said the committed response of partner organisations prevented an environmental disaster. “I sincerely hope that one year on from this incident, life is back to what it was for all the residents, businesses, industries and rail passengers that were affected at the time”, he said. “The recovery task was helped by the terrific co-operation and understanding of residents and elected members.”