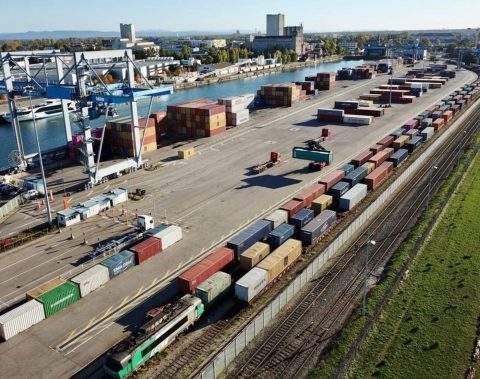 Port of Strasbourg wants rail to be its operational frontrunner

The Autonomous Port of Strasbourg, France’s second-biggest river port, will invest in its rail infrastructure and draw a new strategy to handle increased rail traffic. Specifically, it aims to expand its rail terminal to manage the expected doubling of rail freight volumes by 2030. Moreover, it wants to provide incentives for modal shift and transform into a carbon-free zone.

The project to expand the terminal’s facilities will take place between 2023 and 2025. The costs reach 1,7 million euros and will be co-financed by the Connecting Europe Facility and the French Government via the national rail freight recovery plan.

In September 2021, the port conducted a study about the construction of new terminal facilities. However, the study conclusion showed no reason to build a new terminal from scratch. That is so because the port of Strasbourg has already been investing in rail infrastructure during the past few years by expanding its southern container terminal.

A study conducted by the port back in 2020 showed that Strasbourg can double its rail freight volumes by 2030. That is also in line with the French national plan to double rail freight’s market share by 2030. Currently, the port serves 17 weekly rail shuttles, and in the recent past, it has seen some frequency increases in services.

For instance, the service between Zeebrugge and Strasbourg runs daily as of 2 July. Additionally, the trains running between Rotterdam and Strasbourg now travel four times per week. The service increase is a confirming indication of the 2020 study estimating the volume doubling. Apart from that, it also makes Strasbourg the busiest rail freight terminal in the Alsace region.

To be able to handle the increasingly growing volumes, the port of Strasbourg will carry out the following expansion works that will finish in 2025:

On top of the plans to expand rail infrastructure, the port of Strasbourg also aims to become a low emission zone, and rail is key to this attempt. For this reason, the port authority has decided upon some measures, mainly of a financial nature, to stimulate the use of rail freight in its premises.

Specifically, it wants to provide incentives to companies to switch to rail even for last-mile operations traditionally carried out by trucks. As of 1 January 2022, the port will offer rail freight traffic in its rail network free of charge. In addition, it will not charge any rail fees for three years to operators from the Lower Rhine region that use the port for the first time and use rail for their last-mile operations.

Finally, there is a focus on stimulating stronger synergies between rail and barge transport in the port’s premises. As a result, any operator who will have reached in year N a barge-to-rail traffic of at least 100 full containers will be reimbursed 100 per cent of the port fees paid in N+1 for its barge-to-rail traffic.