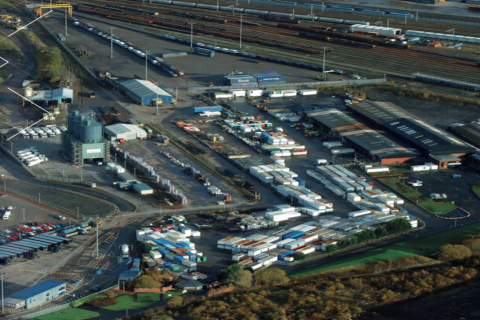 Hot on the heels of COP26 – although that may be exactly the wrong metaphor – Scotland’s Low Carbon Logistics event starts its three-day run at Mossend rail freight terminal, in Bellshill, just a short journey from Glasgow. Low Carbon Logistics plans to be far more than vague environmental talks.

Low Carbon Logistics has been convened to highlight Scotland’s contribution to the resurgence in the rail freight sector. Glasgow, or north Lanarkshire for that matter, may not be the most obvious place to demonstrate global warming. It’s easily possible to shiver in the Scottish sun in November, but there is heated debate guaranteed within the walls of the soon to be rebranded Mossend International Railfreight Park, reflecting the massive expansion underway.

Campaigns for freight from north and south

Tracks have been laid especially to host exhibitors and some set-piece opportunities, including a locomotive naming ceremony on each day. GB Railfreight has that stage to themselves on Monday with a class 92 electric locomotive to be christened. However, the big guns wheeled in for the opening including the Scottish government transport minister Graeme Dey.

Dey, a member of the Scottish parliament for Angus South, can point to several rail freight developments in Scotland but will have the private sector to thank for tangible ‘tracks on the ground’. In his own North East constituency, campaigners are seeking significant route development, backed by freight potential. There are also calls for cross-border development – extension and upgrading for mixed-traffic capability of an existing route between Edinburgh and the central Borders.

With Scotland having led the way in setting targets for rail freight development, there is plenty with which Dey can appease the sector. Again though, the private sector has taken the lead. Chris Swan, rail development manager of Tarmac, also on today’s line-up, has committed his company to rail, with a vastly improved terminal at Dunbar in East Lothian.

Perhaps thought the most eagerly awaited development is the more modest terminal at Blackford in Stirlingshire. The private pair of sidings have taken years to near completion but will serve the iconic Highland Spring mineral water facility. The coordinator behind that project is Morwen Mands, Head of Sustainability, at Highland Spring Group, who is on stage alongside Kenneth Russell, Commercial and Strategy Director, of John G Russell Transport.

Better known for their purple-liveried trucks, Russell, in fact, operate five terminals in Scotland. “Rail cannot operate in isolation from other transport modes”, says the company of their holistic approach. “All Russell rail linked depots are road connected with an on-site distribution fleet enabling the smooth transfer of goods for onward delivery.”

In the rain at Mossend, GB Railfreight named a Class 92 electric locomotive ‘Billy Stirling’, in recognition of the Peter D Stirling company director who moved the business into railfreight. The naming ceremony formed part of the ‘Let’s Talk about Rail Freight’ day at the Low Carbon Logistics event, and was unveiled by Billy Stirling’s daughter, Julie Corr.