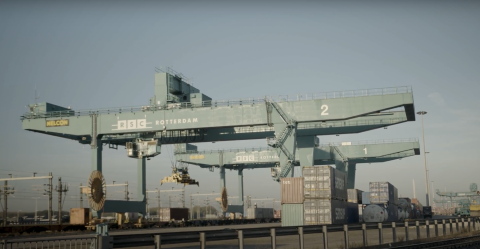 The Moscow Shuttle departed from Rotterdam

The new direct rail freight service connecting Rotterdam with Moscow commenced on Thursday, 28 October. The ‘Moscow Shuttle’, as it is called, departed from the RSC Waalhaven terminal and will travel through Poland and Belarus and the Brest/Malaszewicze border-crossing before reaching its final destination.

The new service is organised by Smartcontainer BV and Ruscon, both part of the Delo Group. Tilburg based GVT Group of Logistics is responsible for the trainload that was transported from Tilburg to Rotterdam also by train.

The ‘Moscow Shuttle’ will offer one weekly roundtrip in its initial stage, while the goal is to increase to three roundtrips per week as of 2022. Smartcontainer’s representatives underlined that the train is open to all kinds of cargo, from containers and bulk cargo to semi-trailers.

The train is considered an essential counterpart for the economic cooperation between the Netherlands and Russia. A representative of the Russian embassy in the Netherlands explained that the northern European country is Russia’s number one export destination in Europe and the second worldwide.

Consequently, establishing a direct train between the two countries was a needed development. Involved companies shared the same views. Roland Verbraak, general manager at GVT Group of Logistics, said that the ‘Moscow Shuttle’ constitutes the long-awaited gateway from the Netherlands to Moscow that the company was trying to establish.

GVT also launched the first train from Tilburg to Kaunas in Lithuania in July. In an interview at RailFreight Live, Verbraak had mentioned that Kaunas could become the gate to Moscow. However, the establishment of the Rotterdam-Moscow shuttle paved a more direct way. Verbraak sees this as a new opportunity. “We have the Kaunas train, and now we are aboard in this train to Moscow. In the future, we could also find ways to combine them,” he explained.

The launching ceremony saw many different attendees. Apart from the companies involved in the service, delegates from Russia, Armenia, Azerbaijan and Kazakhstan were also present. Specifically, they held a roundtable discussing the new possibilities that the Rotterdam-Moscow connection brings for their countries.

It seems that the shuttle brings more than just a connection between the two countries. Both Russia’s and Kazakhstan’s representatives stressed how this link could become a New Silk Road alternative route. The rest of the countries presented their rail freight development agendas and how the new link could be incorporated into their networks. Could the Rotterdam-Moscow service become the new hot transit route on the New Silk Road?

Do you want to know more about Russia and its connections on the New Silk Road? On 7 & 8 December the European Silk Road Summit takes place in Amsterdam, the Netherlands. The Russian share on the New Silk Road is one of the main topics. Interested? You can have a look at the programme here. Or, you can register here.