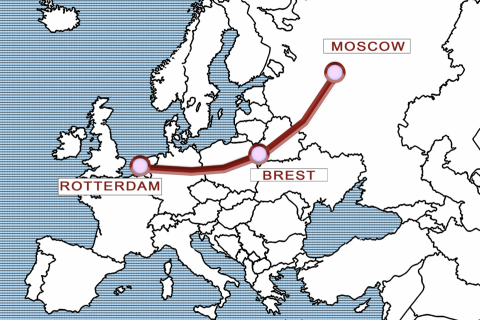 A new cross-border connection is in the pipeline for Rotterdam, organised by Smartcontainer B.V and RUSCON, both part of the Delo Group. The Moscow shuttle train, as it is called, will connect Rotterdam’s RSC Waalhaven with Moscow’s Selyatino and Vorsino terminals.

The shuttle train will use the Adampol Terminal in Małaszewicze as a border-crossing point between Poland and Belarus on its way to Russia. Between Rotterdam and Belarus, it will be handled by Smartcontainer, while from Belarus to Moscow, RUSCON will take over.

As for its frequency, it will serve the route with one roundtrip per week, every Thursday or Friday. The destination in Moscow will vary between the two terminals according to the type of transported cargo.

Smartcontainer B.V is a subsidiary of RUSCON based in Rotterdam. Its objective was to enhance the European transport market and strengthen the presence of its mother company. Simultaneously, it wanted to provide new opportunities for shippers to find their way through Russia and across the New Silk Road.

As RUSCON’s president Sergey Berezkin underlined in April, Smartcontainer is strategically a new milestone for RUSCON’s expansion of services in Europe. Five months after its opening, the company is already establishing a new gateway between the Dutch harbour and Russia.

To Moscow and beyond

For Smartcontainer choosing Moscow as the destination from Rotterdam was a safe decision. The Russian capital accounts for almost half (44 per cent) of all Russian import cargo flows. Additionally, it functions as a platform from where trains can reach other destinations in the country and broader Asia.

In fact, that is the service’s most significant benefit because combined with RUSCON’s terminal network in Russia, Moscow offers many more possibilities to shippers. The company can take cargo from Moscow to nine other domestic destinations, including Baltic, Black Sea and Far East ports. On top of that, it offers two direct rail connections to China and one multimodal, including a sea leag from the Far East port of Nakhodka.