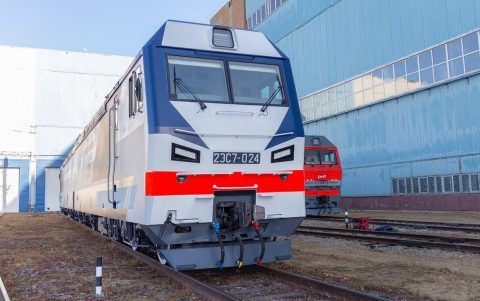 It is not the first time that STM provides locomotives to Silkway Transit. In August, the Russia based manufacturing company supplied the Kazakh rail freight operator with four TEM14 shunting locomotives used for operations at the Dostyk-Alashankou border point.

Apart from that STM, has a “long-term tradition in the railway sector of Kazakhstan, while it aims to extend more”. Only during 2020, the company delivered eight shunting locomotives to the country’s metallurgical enterprises. Since 2007, STM has supplied 46 diesel locomotives of the TEM7A, TEM9, TEM14, TGM4B, TGM6D series, over 80 units of track maintenance vehicles and 246 hopper cars to Kazakhstan. Now it was the time for the ‘Black Granite’ series.

The 2ES7 electric locomotive is ideal for serving heavy traffic on broad-gauge electrified railway lines in Central Asian and CIS countries that operate with alternating current of 25 kilovolts. Specifically, the Black Granite has a built-in asynchronous traction drive that allows the traction of very heavy trains up to nine thousand tons.

During heavy train operations, the maximum power of the electric locomotive reaches 8,8 megawatts. The 2ES7 locomotives are also suitable to travel in routes that include limiting ascents and long descents. This characteristic will also prove valuable in increasing the throughput of the mainline traffic of Kazakhstan Railways.