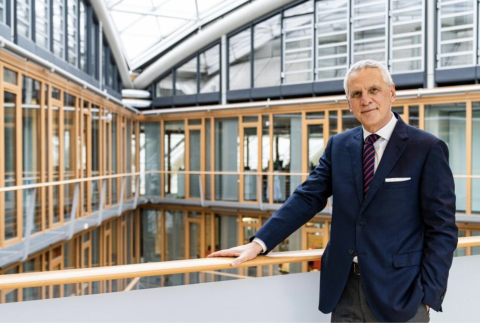 EIB: ‘We have the money for rail freight investments’

Interoperability, modernisation and more capacity are some of the essential elements that European rail infrastructure lacks. For all these to improve, everyone agrees on one prerequisite: money. But is money really missing?

Many said that investments are a significant issue, but the European Investment Bank (EIB) claimed it could provide the needed funds. So what is the real problem here? RailFreight.com was there to report.

The money is there

“The needed investments by rail freight is something that we can finance”, claimed Kris Peeters, vice-president of the European Investment Bank, during his speech. EIB has already provided funds for quite a few rail freight-related projects during the past years.

In fact, Peeters openly said that the money is there and all that needs to be done is ask for it. This statement came as a response to Francois Bausch, deputy prime minister, minister of defence, mobility and public works of Luxembourg, who said that “the public sector must fund infrastructure”.

Political courage is the key

However, Bausch provided an answer to the current issues on his own. While discussing the investment model Luxembourg applied to rail infrastructure, he said that the country heavily relied on state and EU funds. “That’s how we did in Luxembourg, and now the country invests even more than Switzerland”, he underlined.

Specifically, he stretched the fact that funding is not the main issue here. “Political courage is what we need more”, he said, meaning that, indeed, if countries want to invest in rail infrastructure, they can find the way as long as they truly decide to do something about it.

Generally, both Bausch and Peter Balazs, European coordinator of the North Sea-Mediterannean corridor, agreed on one thing: that modernisation and interoperability are essential, but the construction of new infrastructure is even more critical. “We do not just need modernisation, but extension. We need more tracks, more capacity,” emphasised Bausch. On his end, Balasz commented that European rail infrastructure is one of the best in the world, but apart from modernisation, it needs more construction”.

Moreover, according to Bausch, the real issue is not that states do not invest currently. It is that they have not invested in years. His suggestion would be to focus on each country’s needs and cooperate with each other closely. He used as an example the cooperation between Luxembourg and France. “The two countries have agreed that Luxemburg will finance 50 per cent of the infrastructure modernisation in France. We will do it to resolve all the bottlenecks that our country faces there”. Is this the way to go for the future? When discussing interoperability, then this type of cooperation is a must.