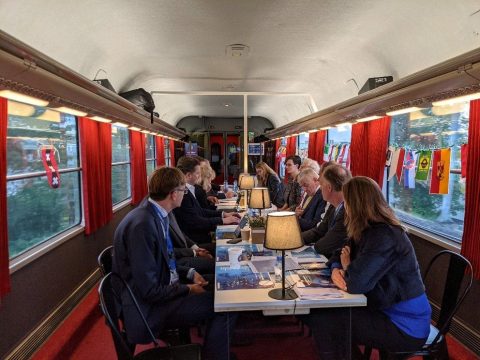 This was discussed onboard the Connecting Europe Express

The Connecting Europe Express has passed through several stations in the Netherlands and Belgium today, a chance for Dutch and EU rail freight representatives to catch up on the latest developments. “The Netherlands is doing a lot, but I would like to know what solutions there are for the congested railway network”, said Kristian Schmidt, director of land transport at DG MOVE.

As RailFreight.com, we hopped onboard the train as well. We cover the journey from Amsterdam to Bettembourg, where a dedicated freight event takes place tomorrow, Tuesday 5 October. On Monday, the entire journey was dedicated to rail freight in, to and from the Netherlands, organised by knowledge platform RailCargo.

“What are you waiting for? What are your plans” asked Schmidt during a panel discussion in the conference coach of the train. “The Netherlands has one of the most congested railway networks. There must be better use of the existing network, but probably there should also be more railway lines dedicated to rail freight” said Schmidt.

On behalf of infrastructure manager ProRail, Jessica van den Bosch explained what is currently being done in terms of capacity and infrastructure. In fact, this is the title of one of the six focus groups. “We look at what we can do with the existing infrastructure. But we will also see the opening of the Theemsweg Trace this November, a new railway bridge in the port of Rotterdam.”

“Connections to the ports are a very good example of how the network can be improved. Not only to the large ports, but also to the smaller ports”, said Herald Ruijters, director at the European Commission, DG MOVE, responsible for investments, innovative and sustainable transport.

This could only be agreed upon by the port of Moerdijk. CEO Ferdinand van den Oever: “We are trying to position ourselves between two giants (Rotterdam, Antwerp), and in doing so, rail freight connections combined with short-sea connections are key to survival. This transport model is the future. And these words are from a port that relies heavily on rail.”

“The Netherlands has a clear advantage with its ports. Therefore, I hope that intermodal is at the heart of the Dutch transport policy. The Dutch are experts in logistics, and they have the ability to combine road, rail and maritime”, emphasised Schmidt.

Steven Lak, head of the RailFreight Table, a group of Dutch market players and policymakers, said that the key challenge was in making people act upon the plans that everyone has. “People tend to stay in their own box, rather than work together. It is also challenging to find consensus when there are so many people and parties involved. But sometimes you don’t need consensus, you just need a push.”

Apart from the ports and the infrastructure, there is also a lot of focus on digitalisation. “There has finally been a decision on the Digital Automatic Coupling (DAC) model that will be used in the EU”, said Schmidt. “When this train stopped in Halle, we witnessed a demonstration of this model. It is now up to the sector to make the needed investments, and this should be done as soon as possible. The longer it takes, the more it costs. We should not wait to make historical changes.”

1 comment op “This was discussed onboard the Connecting Europe Express”