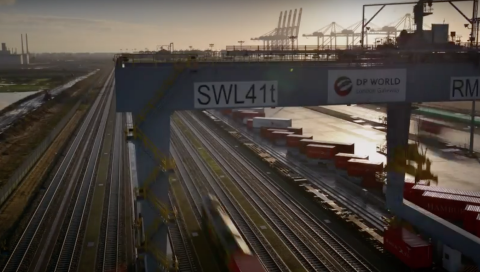 DP World, the operators of London Gateway, the deepwater container terminal on the River Thames, have announced significant expansion plans. The Dubai-based owners intend to start work in October on a fourth berth at the port. With extensive facilities already in place, rail freight will play an increasing role in forwarding the volume of international trade delivered to the quayside, just twenty-five miles east of central London.

The project, costing 300 million pounds (335 million euros), will, according to DP World, significantly strengthen the UK supply chain. The timing could not be better. A mounting storm is rolling in on UK logistics, affecting all economic sectors. The importance of new, rail connected facilities has not been lost on the UK government. The chancellor of the exchequer was guest of honour at the launch event, hosted in London’s iconic Savoy Hotel.

London Gateway has been in the news ever since the owners successfully applied to be part of the freeport on the Thames. Together with other neighbouring facilities, it forms part of a planned programme of government-sponsored economic stimulus.

Integrated rail freight facilities played a significant role in the success of that freeport bid. The owners were quick to take advantage of what they claim are the longest facilities in use on the UK national rail network, accommodating 775-metre trains (740m payload) consists. With the new berth planned to increase capacity significantly, rail freight operators can add to the existing daily timetable, serving distribution terminals including Manchester, Birmingham, Leeds and Glasgow.

The world’s largest ship on their way

Given the size of the expansion, rail freight may well be the only viable way to move the additional volume of intermodal traffic the port expects to attract. DP World says that not only will it increase supply chain resilience, but it will also be capable of handling capacity from the world’s largest vessels.

“Our latest major investment in the UK will give London Gateway more capacity to handle the world’s largest vessels than any other port in the country”, said Sultan Ahmed Bin Sulayem, Group Chairman and CEO of DP World. “As a central pillar of Thames Freeport, London Gateway’s new fourth berth will allow even more global connectivity, on the doorstep of Europe’s largest consumer market.”

Raise capacity by a third

In the first six months of 2021, London Gateway saw a record throughput of 888,000 TEU. That represents an increase of more than 23 per cent on the previous best performance for a year first half. The new fourth berth will raise capacity by a third, and completion will coincide with the delivery of a new fleet of 24,000 TEU vessels in 2023/2024, which will all be operated between Asia and Europe.

“Our new freeports will create national hubs of trade, innovation and commerce, and attract more investment”, commented Rishi Sunak, the UK Chancellor of the Exchequer. Along with the Port of Tilbury and Ford’s Dagenham plant, DP World London Gateway will form Thames Freeport. It should be noted that rail facilities also contributed to the success of DP World Southampton being awarded freeport status as part of Solent Freeport.