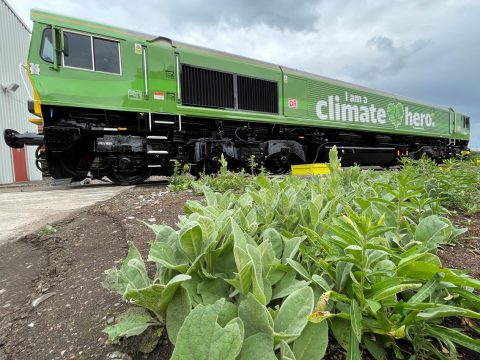 Last week’s showcase of a bio-fuelled class 66 freight locomotive gave the public a chance to see for themselves how the industry is tackling the challenge of climate change. Will alternative fuels be the long term answer to diesel power, or does this publicity drive represent an interim solution until the network is fully electrified?

With Glasgow just a matter of weeks away from hosting the United Nations Climate Change Conference, commonly known as COP26, it was no coincidence that historic Glasgow Central station was chosen as the venue to show off DB Cargo UK’s hydro-treated vegetable oil (HVO) fuelled class 66, an example of the normally diesel-powered workhorse of the freight fleet. The occasion marked a highlight of Scotland’s Climate Week 2021.

Last week, commuters may have been bemused to see a freight locomotive occupying platform 11 at Glasgow Central station. Named “I’m a Climate Hero”, locomotive 66004 made an unaccustomed visit to showcase what the industry hopes will be a major step forward in the reduction of carbon in rail freight.

Notwithstanding that the rail freight sector has well-established environmental credentials, DB Cargo UK’s “I am a Climate Hero” locomotive went on static display in the station, promoting its HVO fuel status, giving everyone a close up view of Big Red’s Big Green, and the latest development in cleaner, greener freight trains.

Among the visitors, not surprisingly, was the Transport Minister at the Scottish Government, Graeme Dey. “I’m pleased the Climate Hero Locomotive has arrived in Glasgow Central Station during the Scottish Government’s Climate Week to help highlight our vision for future rail freight”, he said. “We want to see a competitive rail freight sector playing an increasing role in Scotland’s ambition for a net-zero, sustainable, inclusive economy by providing a safer, greener and more efficient way of transporting products and materials.”

Despite some forward-thinking initiatives, Graeme Dey’s Scottish National Party government has been criticised for slow progress on rail development, while eye-catching road projects have been signed off with comparative speed. Dey’s office would point to positives, such as the recent timber traffic trials and the commercially led developments, such as the modest facilities at Highland Spring mineral water in Perthshire, and the much larger intermodal facility being developed just down the line from Glasgow at Mossend International Railfreight Park (MIRP) – where DB Cargo UK have significant interests.

Dey, however, defends his government’s record and welcomes the collaboration of the industry at large. “Public and private sector partners have undertaken considerable work since the publication of our Rail Freight Strategy in 2016 to support and promote sustainable rail freight growth in Scotland”, said Dey. He also noted the programme of wiring that continues in Scotland – passenger led, but having benefits for freight operations too. “The rolling programme of efficient electrification supports the key role that rail freight has to play in helping to achieve our climate change objectives, and it is encouraging to see that the rail industry is also taking forward decarbonisation measures.”

A joint statement from the organisers of the event, including Network Rail and the Scottish government, said DB Cargo has led the way through the conversion of a Class 66 Loco to run on Hydro-treated Vegetable Oil (HVO). “Sustainably-sourced lower-carbon alternative fuels and private sector innovation will be key to some areas of transport decarbonisation over future years, and progress is moving at pace.” Transport Minister Dey applauded the initiative from the freight operator. “I welcome DB Cargo’s commitment to this agenda and will continue to work with other potential partners to get more involved in creating a low carbon, successful rail freight sector for Scotland.”

Delegates coming to Glasgow in November for the UN Climate Change Conference may not experience much of the effects of global warming on the banks of the River Clyde. However, cold starting after nine hours sitting at the buffers did draw some tongue-in-cheek remarks from the Glasgow public – who are not known for their shyness. “Frying tonight” and “Fish and chips with a deep-fried Mars Bar please” being among the more repeatable. However, the vast majority appreciated the overall environmental benefits of reduced emissions represented by rail freight operations in the logistics chain.