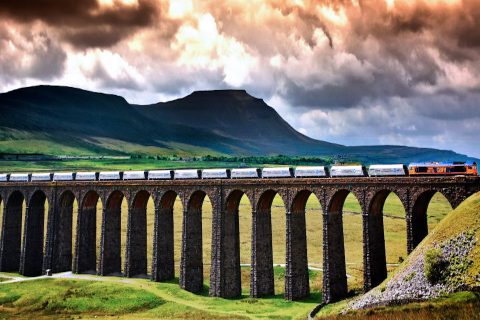 Tarmac has been named as Business of the Year at the annual Rail Freight Group Awards. Tarmac, who lay claim to being the UK’s leading sustainable construction materials business, were crowned by a panel of peers from the rail freight industry. The RFG, the representative body for the sector, hosted the event last week at the De Vere Latimer Hotel near Chesham in Buckinghamshire.

The judging panel chose Tarmac, which supplies construction materials, because of their commitment to developing links with rail. As a customer, rather than supplier in the rail freight industry, their award recognises that collaboration. The panel cited their commitment to the growth and expansion of rail freight, through investment in innovative technology, new wagons and rail-linked facilities.

“With net zero becoming an ever-greater priority, the rail freight network is becoming more important in the UK than ever before”, said Chris Swan, head of rail at Tarmac. “We’re proud to play a significant role in the industry and its future. We’re constantly reviewing how we operate to integrate new innovation and ways to accelerate efficiency and decarbonisation, not just from our own operations but across the industry as a whole.”

Swan went on to say how rail freight is a hugely important, yet often unseen part of Tarmac’s daily operational activity serving the UK construction industry. “To receive the RFG’s Business of the Year Award is testament to the importance of rail freight to our operations and its significance to the construction materials sector. A huge thank you goes to our freight partners for their ongoing support and, most importantly, to our dedicated rail team here at Tarmac.”

Tarmac has a long association with the rail freight industry in the UK. They have been involved in a number of projects and commitments to sustainable development. Recently the company collaborated over depot electrification technology, and has been instrumental in a number of other projects, including a dual-fuel initiative led by DB Cargo UK.

The judging panel recognised the contribution made by the company. “It works across the construction industry to encourage others to use rail”, said their citation. “It provides a clear voice in rail industry organisations and bodies. It leads by example, such as its involvement with the University of Derby in the project ‘Opportunities for decarbonising freight’, its work to help remove obstacles to the introduction of jumbo trains.”

The Rail Freight Group Awards were sponsored by independent law practice Burges Salmon and by GB Railfreight. The Railway Benefit Fund benefitted from charitable donations on the night.