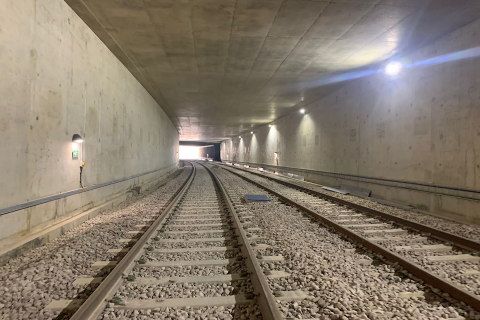 The tunnelling work at Werrington has been a high-profile project for the national infrastructure agency, and completion of the ancillary control works now moves the project a stage nearer to full commissioning and operation.

Work began onsite at Werrington in the Summer of 2018. What Network Rail describe as a ground-breaking 11,000-tonne tunnel, was slotted into place in a high-precision engineering job. The line, which connects London with the north east of England and Scotland, remained largely open to traffic during the process. The structure was built onsite as trains continued running on the East Coast Main Line, and was hydraulically pushed into place in January 2021.

Engineers have been working at the Werrington site, north of Peterborough, and completed work on the signalling system over this past weekend (Saturday 4 and Sunday 5 September). Freight and passenger services were not interrupted. Essential work will now take place to test the new tunnel ready for freight trains to use it from this winter.

Engineering teams have installed around eight kilometres of track in the area which runs through the new tunnel. The project is part of the 1.2 billion pound (1.34 billion euros) East Coast Upgrade. Ed Akers, Principal Programme Sponsor for Network Rail’s East Coast Upgrade, said they will soon be in a position to accept freight trains, and integrate the tunnel into network operations. The dive underneath the East Coast Main Line, rather than crossing it, will greatly improve reliability and increase capacity on the busy mixed-traffic route.

“Our teams have completed the vast majority of this project, without impacting on train services”, said Akers. “It will bring faster, more frequent and more reliable services between London, Peterborough, the North of England and Scotland.”

Speaking for the UK government, Rail Minister Chris Heaton-Harris, praised what he called an astounding engineering project at Werrington. “This scheme, part of our investment into the East Coast upgrade, will unlock the potential of our railways, freeing up tracks so that passengers and freight can have faster, more reliable journeys”, he said.

While operators will benefit from the new underpass, rail freight has been playing a huge role in the whole East Coast Main Line project. Significantly, the sector collaborated with Network Rail on the total remodelling of London King’s Cross, the southern terminal of the line.