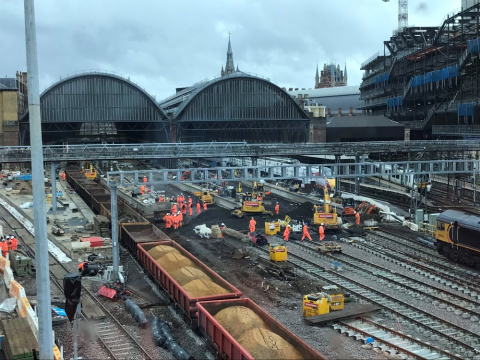 A programme to upgrade the entire UK East Coast Main Line is reaching deep into the southern terminus of the line. Rail freight is playing a significant part in the project. It will also be a significant benefactor from the project. Network Rail teams are currently working at London King’s Cross station to reopen the third Gasworks tunnel, straighten platforms, upgrade tracks and replace overhead line equipment. Materials and equipment are being brought to the site by rail, during lengthy engineering possessions.

Greater capacity at London King’s Cross station will allow higher-frequency passenger services on the prestigious East Coast Main Line (ECML). Much more wide-spread upgrades, all the way along the 400-mile (640km) route will also allow for much more freight traffic on the intensively used mixed-traffic line. At the end of April, the newly constructed platforms zero to six will re-open, with work then starting on platforms seven through to eleven.

This work at London King’s Cross is the final disruptive phase of the 1.2billion pound (1.45 billion euros) East Coast Upgrade, which is due for completion in early June. It will deliver a simplified track layout as well as an increase in the number of tracks serving the station from four to six, enabled by the reopening of the previously disused tunnel. This will allow more trains to enter and exit the station, reducing congestion and, as a result, simplifying operations out of London, making more paths on the ECML in general.

The huge infrastructure project will also accommodate the faster acceleration and deceleration of the recently introduce Hitachi Azuma passenger trains, bringing faster, more frequent services along the East Coast Main Line, better connecting towns and cities between Scotland, the North of England and London. Other projects have included the redevelopment of Peterborough station approaches, and the remarkable bridge project at Werrington.

Passenger operators, principally the long-distance operator LNER, will continue to operate at King’s Cross during the work. Timetables will be reduced to allow for engineering paths and works. There will be a total engineering possession from Friday 23 April to Sunday 25 April, to allow signalling work to be completed. There will be further possessions during the summer.

Although built as a terminus, the works at Kings Cross will enhance the through traffic lines as well. Ironically, when complete, the station will actually be smaller, with one terminus platform removed. The reinstatement of two extra approach lines – making six in total – will also take away the last remains of York Road station, a visible adjunct to King’s Cross, long since abandoned.