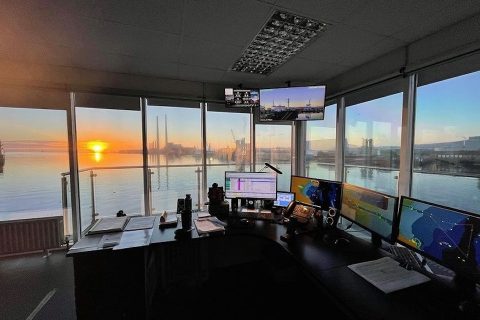 There have been positive moves to resume rail freight operations between Dublin Port and the intermodal terminal at Ballina in the West of Ireland. A statement from the political representative for region, Alan Dillon, says services are about to resume. There has been a hiatus in rail traffic at Dublin Port after land was allocated to handle post-Brexit vehicle checks, which compromised the rail layout in the port.

Dublin Port may soon have its rail service from the West of Ireland reinstated. That is the message from Alan Dillon, the regional representative at the Irish parliament for Ballina, the point of origin in the west of Ireland. In his statement, Alan Dillon says that services will soon be resumed five days a week from the modest terminal at Ballina, taking intermodal traffic to and from Dublin Port, Ireland’s biggest trading facility.

Disagreement between port and parliament

There has been heated debate at the Irish Dáil (parliament) overt the recent suspension of rail services at Dublin Port. Most critically, the service between the west of Ireland intermodal terminal at Ballina has been the subject of much angry debate. The Port operators suspended rail handling in order to allocate space for lorry parking, in anticipation of significant requirements for customs clearance for raod lorries. The Port’s relatively small value of rail traffic was sacrificed in the process.

That decision has however caused significant disagreement between the Port and the parliament. Any move to reduce Ireland’s albeit small rail freight operations has been seen as contrary to the decarbonisation policy of the government. Particularly vocal has been Alan Dillon, an elected representative of the Fine Gael Party – one of the three main parties that dominate the parliament. Dillon, represents the Ballina community and has been critical of the move, which he sees as economically detrimental to his constituents.

However, in the coalition style of Irish politics, progress has been made. In a statement issued by Mr Dillon on Monday (30 August), the Mayo Teachta Dála (elected member, commonly abbreviated to ‘TD’) says that there will be a resumption of five services weekly from Ballina to Dublin port. Mr Dillon says that he has been in consultations with Eamon Ryan TD, who is the Minister for Transport and the Minister for the Environment, Climate and Communications. Mr Ryan leads the minority Green Party in Ireland, and clearly has political credentials which encourage him to pursue rail freight options in line with carbon reduction targets.

“Following ongoing representation and engagement with Minister Eamon Ryan and his department officials, it was confirmed today to the Mayo TD that five services per week will resume from Ballina to Dublin port”, said a statement from Mr Dillon’s office.

Rail freight has been seen as a marginal part of the Irish economy for some time, and the state operator – Irish Rail – has been criticised in popular circles for a lack of enthusiasm. However, the sector remains active, and the Ballina – Dublin intermodal flows represent a significant part of their operations. “While there are restrictions on the number of services that can be handled at Dublin port due to limited capacity,  this is a positive step to secure the continuation of rail freight from the west into the port”, said Alan Dillon.

“Some challenges will remain into the future regarding rail freight at Dublin port, but given the significant benefits rail freight can bring in decarbonising the transport industry it is essential that the country and all the key stakeholders fully embrace the ambitious plans set out for rail freight”, he said. “I am determined to arrive at a long-term sustainable solution to protect the Ballina service”, concluded Dillon.

A date has not been given for the resumed service, nor is it clear if customers will all revert to rail transportation. Irish Rail do however publish a freight prospectus for their services.