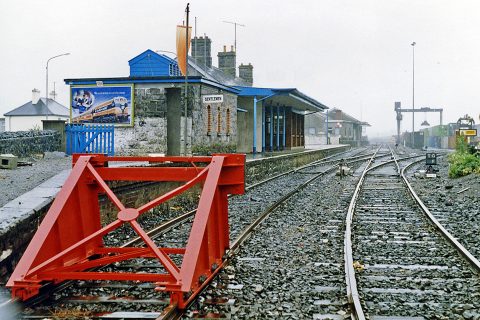 Regular rail freight services between Dublin Port and the intermodal terminal at Ballina in the north-west of Ireland have been suspended. The extraordinary cause is a backlog of cargo in the port, which operators blame on congestion in the wake of Brexit. The matter has been the subject of debate in the Irish parliament, and widely reported in Irish media.

There is anger in the Irish parliament over the suspension of rail freight services between the terminal in Dublin Port and the north west rail head at Ballina town. Local businesses, including multi-national drinks manufacturer Coca Cola, are being frustrated by the logistics hold up. Local sources blame a snap decision by the Port operators, Doyle Shipping Group.

Trains take up too much room

Irish Rail (Iarnród Éireann) has expressed disappointment that Dublin Port has stopped facilitating the rail freight service, saying it was for operational reasons. The national rail operator says it was not consulted, nor was International Warehousing and Transport (IWT), the company that has been running the service since 2009.

In a radio interview, Dublin Port’s operators said that port space is very constrained, and made the extraordinary claim that trains take up a lot of room. They did not explain how established rail infrastructure could impact on road operations, although their statement notes that the Ballina to Dublin intermodal service conveyed just under ten thousand containers in 2020. That figure, they say, represented only around one per cent of all loads handled by the port.

The port operators, who are independent of the state owned Dublin Port Company, claim that the rail service is the ultimate casualty in a Brexit-related snarl-up. They say that the port has been compelled to hand over 14.6 hectares of land – which they equate to twenty football pitches – for additional customs and border inspections. Dublin Port say they have not closed the door to rail freight operations – and suggest that Irish Rail and IWT operate from the nearby East Wall rail yard. However, that would entail double handling containers from trains to the dock side.

Ballina has been at the heart of rail freight development proposals this year, and this comes as a blow to reviving the market in Ireland. The Ballina parliamentary representative Dara Calleary has already met with Hildegard Naughton, the Irish Minister of State at the Department of Transport, calling the situation unacceptable. “I reiterated the importance of this service to Ballina and to industry in the west”, she said. “She assures me that her department is actively pursuing a resolution.”

The Taoiseach – the leader of the Irish government – Leo Varadkar, said his government was very concerned that the question of continuation of rail services into Dublin Port should arise at a time when the focus is on ensuring that Irish transport modes are environmentally, economically and socially sustainable. “The ultimate aim is that rail freight continues to be facilitated by Dublin Port in line with government policy, particularly having regard to the strategic review of rail freight under way at present”, he said. “Neither the Minister for Transport nor the Department is directly involved in decisions taken by what is a privately operated terminal in Dublin Port; it is not operated by the Dublin Port Company, which is State-owned.”

For their part, Iarnród Éireann Freight talks up the benefits of moving goods by rail across Ireland. “Rail transport offers key advantages such as moving full trainloads of ISO tanks, containers or bulk freight such mineral ores or timber product”, says their statement. “The lines between Ballina and Dublin port and Waterford port are cleared to carry 9 foot 6 inch high cube containers on standard floor wagon, which offers flexibility and reliable direct connection with maritime traffic.”

Meanwhile, the modest terminal at Ballina waits to receive rail freight from Dublin, and Irish truckers are reacquainting themselves with the N5 highway.