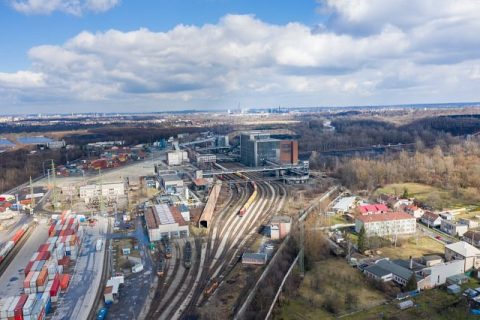 Rail freight performance in Poland showed a decrease last year, but did reltalively well considering the pandemic that impacted the overall figures of rail. Moreover, intermodal transport is the real winner and showed an increase of cargo volumes in 2020. These are the figures presented by the Polish Office of Rail Transport (UTK).

The transport of 223.2 million tonnes of freight by rail means a decrease of 5.6 per cent compared to the volumes recorded a year earlier. In 2019, 236.3 million tonnes of cargo was moved across the country by rail. The year before that, in 2018, was also a better year.

The pandemic and Poland

The main reason for the decline is the pandemic, and considering this situation, the market fared relatively better than passenger transport by rail. This sector was hit much harder by the pandemic. According to the office, the figures show that there is great potential for rail freight in Poland.

Intermodal as a winner

Even more promising is the intermodal market, the only market that witnessed growth in 2020. Its market share measured by the weight of transported loads reached 10.7 per cent, 2.4 percentage points more than in 2019. The volumes in tonnes increased by 21.9 per cent to a historical record.

“2020 was record-breaking – nearly 23.8 million tonnes of goods were transported via intermodal means- comments Ignacy Góra, President of the UTK.” The report explains that intermodal grows every year, but in 2020 it was also influenced by the increasing importance of the e-commerce market. A lot of goods are ordered from China and are transported to individual customers by rail, through Poland.

This partly has something to do with the way these speeds are calculated, the report explains. On certain routes, the distance is short, and there are border crossings included. For example, the route to Malaszewicze is subjected to congestion on the busy border with Belarus, as it is one of the routes on the New Silk Road. Longer routes fare better when it comes to average speed. However, these average speeds are still relatively low compared to other EU countries and a much-discussed topic within the rail freight industry.

Crisis with a bright future

Last year was extremely difficult for the global economy, and the rail transport sector failed to defend itself against the crisis, the report concludes. This not only becomes evident from the decrease in volumes handled. Based on the financial data of the carriers transporting about 80 per cent of the total cargo weight, revenues of these carriers went down by 6 per cent to PLN 8.24 billion (1.79 billion euros). EBITDA for the rail freight sector in 2020 amounted to approximately PLN 1.14 billion (250 million euros), a decrease of 23 per cent.

At the same time, there is a bright future for rail, the UTK president believes. “In transport of goods, and in particular in intermodal transport, rail transport turned out to be a very good alternative to road transport. Due to pandemic-related transport restrictions and mandatory quarantine for people crossing the border, only railways allowed for the smooth delivery of goods. Despite the difficult situation caused by the pandemic, rail freight was functioning efficiently, both on domestic and international routes.”