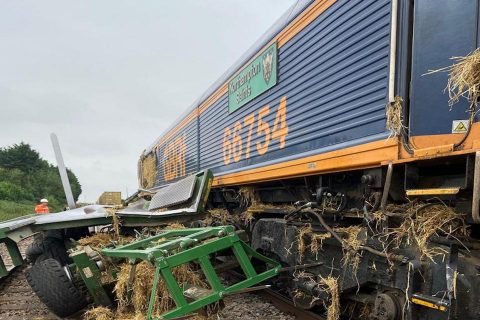 The UK infrastructure management agency, Network Rail, says extensive repair works will be required after an agricultural vehicle strayed into the path of a freight service on a rural Cambridgeshire level crossing that carries a vital freight route.

A non-fatal accident happened on Thursday morning (19 August) at a user-operated crossing on the Ely to Peterborough line. The route, say, Network Rail, may be severely disrupted for several days. The line carries mixed traffic, including intermodal freight, between east coast ports, principally Felixstowe and Harwich and the East Coast Main Line.

Extensive repair and recovery works will be carried out over the next few days following a collision between a freight train and an agricultural tractor on the Ely to Peterborough rail line (on the morning of 19 August). Network Rail say that just after 09:00, a freight train collided with a tractor at Kisbeys user-worked level crossing in the market town of March, Cambridgeshire.

The exact location is between March and Whittlesea stations. Network Rail (NR) is assisting the Rail Accident Investigation Branch (RAIB) with their investigation to understand the incident’s circumstance fully. The crash caused three freight wagons to derail and has caused significant damage to the track, signalling equipment and the level crossing. The train driver and the tractor driver sustained minor injuries.

A full programme of works is required before the line can be reopened safely, including removing the derailed freight wagons, replacing damaged track, repairing signalling equipment, and repairing the level crossing. “The work is expected to take at least three days”, estimate Network Rail in an early statement. “We are aiming to reopen the line early next week. Further timescales and information will be released as the work progresses.”

The Rail Accident Investigation Branch, which was already reporting on a near-miss involving track workers in Salford, Greater Manchester, had not yet issued a statement. However, NR head of safety for Anglia, Richard Tew, said this was a very serious incident. We are working with RAIB to fully understand the circumstances and why this happened. We are thankful that neither train nor tractor driver are seriously hurt, and we are thinking of them both as they recover from the incident.”

Pictures released by Network Rail show a damaged GB Railfreight class 66 locomotive – carrying the number 66754 and name “Northampton Saints” – with the wreckage of the tractor and trailer at the lineside. Produce from the trailer is spread around the unit and the trackbed. “Our main aim now is to safely reopen the line and get passenger and freight services moving again as quickly as possible”, said Richard Tew. “We have a programme of works planned over the next few days. Bear with us while we carry out these repairs. We are sorry for the disruption this has caused.”

Passengers travelling between Ely and Peterborough are being advised to check with their train operators. It is anticipated that freight will be re-routed, possibly further exacerbating the disruption caused by the recent arrival of the Ever Given container ship at Felixstowe.