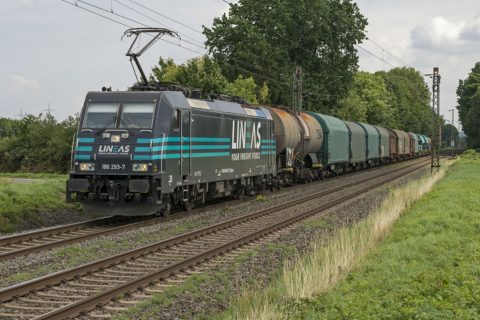 The Artère Nord Est, a rail connection in northern France, is operational again. The connection is part of the North Sea-Mediterranean Corridor in France and offers alternatives for Belgian rail transport between the Flemish seaports and the Mediterranean Sea.

Since the floods damaged large parts of the Wallonian rail network two weeks ago, the North Sea-Mediterranean Corridor through Belgium has been blocked. The line is an important rail freight corridor connecting the ports of Antwerp, Zeebrugge and Ghent with the south of Europe. According to Infrabel’s current planning, the main route will be out of operation until 9 August.

Since Monday, an alternative for freight transport between Northern and Southern Europe has emerged, with the reopening of the Artère Nord Est line. This is the railway in Northern France, which runs from Lille to Charleville, Thionville and Metz, where the Belgian route of the North Sea-Mediterranean Corridor also connects.

“This line was damaged and out of use since the beginning of June, after an accident at the level crossing in Hirson involving a train and a truck,” said Infrabel spokesman Frédéric Petit, who indicated that the French route serves as an alternative for traffic from Belgium to the south of Europe. “Because the damage to the level crossing has not yet been fully repaired, freight transport is only possible at night until 15 August,” he added.

“Better alternative than the Paris detour”

The alternative Artère Nord Est is better than the Paris diversion that Infrabel was investigating. “To go from the Flemish ports to France and Italy, you can also go via Kortrijk (from Zeebrugge and Ghent) or via Ghent (from Antwerp) to Mouscron, where you can cross the French border to Lille and continue to Paris. From Paris, you can travel further to Switzerland and Southern Europe,” mentioned Petit.

For Lineas, the reopening of the line in Northern France is already taking some pressure off the kettle. The rail company’s operations have been badly affected by the closure of the North Sea-Mediterranean Corridor. “As for the Artère Nord Est, this will help as it will allow partial resumption of production on the Sibelit corridor,” said Lineas spokesman Raph de Visser.

Additionally, he mentioned that Lineas uses other detour routes, but he emphasised their limitations. “We will also continue to maximise capacity on the alternative route via Tergnier and Chalons-en-Champagne, but there are capacity restrictions here too,” concluded De Visser.