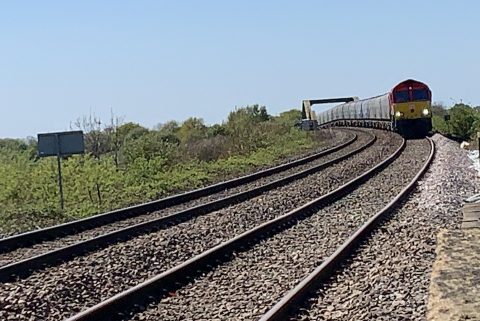 The UK infrastructure management agency, Network Rail, says it will boost the reliability of a vital freight line with essential repairs to Aire Bridge, North Yorkshire. Preparatory work has begun to enable a 2.1 million British pounds (2.4 million Euros) programme of structure and track renewals. The line exclusively serves the massive Drax power station complex, which provides more than ten per cent of the renewable energy to the UK national grid.

Work has begun on a planned renewal of the Aire Bridge rail freight link to Drax power station in North Yorkshire, England. The iconic cooling towers of the facility are a modern-day UK landmark, visible to travellers on the East Coast Main Line and playing a vital part in the country’s industrial and residential energy supply since the station was commissioned in 1967. The station is fuelled exclusively by rail, and the link to the station really is critical to the wider UK economy.

Keeping the towers of Drax Power Station fed with biomes takes a 24/7 rail freight operation. Specialist trains with re-engineered coal hopper wagons deliver fuel from ports all around Great Britain, and they all need to use the Aire Bridge route to access the power station. That’s why Network Rail, the UK infrastructure management agency, have called the planned maintenance and renewals essential.

The upgrade will improve reliability along the vital freight line used by Drax Power Station during the nine-day closure in August. The freight-only line will not impact passenger services, but there will be some local road closures. Network Rail and Drax have been keen to note that the road closures during the work are necessary and will be kept to a minimum. It is also worth noting that the volume of road traffic avoided by the designed-in rail facilities amounts to millions of truck movements over the life of the generating station.

The track over the bridge is used exclusively by freight services travelling to and from Drax Power Station, which supplies over ten per cent of the UK’s renewable electricity. Originally Drax was built to burn coal, mainly from nearby deep-mined reserves, but the station has been refitted over the past decade to burn renewable biomes, which are sourced from around the UK and overseas. The rail infrastructure needs to be replaced so that services can continue to use the line reliably for years to come.

Network Rail engineers will remove the existing track and replace it with new sleepers and ballast beams and stones, improving drainage and supporting the track. Additionally, they will also carry out structural repairs and add a  waterproofing layer to reduce the maintenance work needed in the future.

All work – one closure

“This essential repair work will boost reliability along this vital freight route so that companies that rely on freight, such as Drax, can continue to supply their customers across the UK”, said Richard Owens, Infrastructure Director for Network Rail’s North and East route. “I’m glad that we’ve been able to minimise disruption to the local community and freight operators.”

As part of the project, Network Rail will also renew a section of track at Hensall, near Snaith, to improve reliability along the line. “This will maximise the amount of work done within one closure to minimise disruption to lineside neighbours, freight operating companies and the communities that they serve”, said Network Rail. Work will mainly be over weekends between now and 5 September, with the Aire Bridge (over the river of the same name) closed to road traffic in the nine days leading up to the end of works.

In 2020, the region around Drax was badly flooded and the power station was isolated on what became an island for several weeks. The only logistics able to operate to the station were the biomes trains, and there were famous pictures of the rail routes citing across the flooded countryside. Thanks to rail freight operations, the lights were kept on in many parts of the UK despite the severe weather.

Mark Gibbens, the Head of Logistics at Drax, is well aware of the importance of the station’s rail connections.“This work is vital to safeguard the future of this important infrastructure”, he said. “Network Rail has worked closely with Drax to minimise the disruption this work will have on the power station, and we don’t anticipate any unplanned disruption to supplies.”