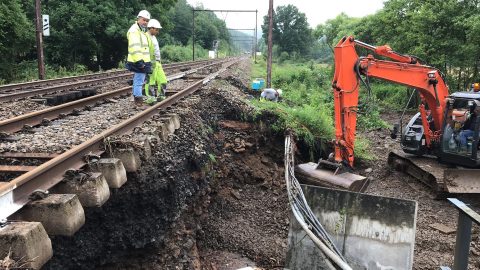 Belgium and Germany are heavily impacted by the floods that took place last week. Their rail networks have suffered substantial damage that will need time and high costs to be repaired. In Belgium, these costs are estimated between 30 and 50 million euros, while in Germany, road and rail network restoration expenses could reach the amount of 2 billion euros.

“For the time being, we estimate the damage to be between 30 and 50 million euros. But the water has not yet disappeared everywhere. So we have to wait and see before we can make a good estimate,” told Infrabel spokesman Thomas Baeken to VRT. This means that the initial estimation still needs reassessment after waters recede, with the costs not being certain yet. As for Germany, the DPA news agency reported that the situation is similar. There is a reconstruction fund in the works, but the government needs more time to assess the situation thoroughly before approving it.

In Belgium, many railway lines in the country’s south are blocked, a bridge has collapsed, mudslides have displaced the ballast, and many track sections and locations are no longer accessible due to ground subsidence under the rail infrastructure. “We have to lay a total of 70,000 tons of new pebbles, we have to replace several tens of thousands of sleepers, and more than 10 kilometres of railway embankments and subsidence have to be restabilised,” said Baeken. Yesterday, Monday 19 July, Infrabel began reoperating some of the blocked lines. However, the Wallonian rail network will not be fully restored before 30 August.

In Germany and the Netherlands, infrastructure has also suffered damages but not as severe as in Belgium. Infrastructure managers of the two countries manage to keep some rail flows going under these circumstances by using diversions and proceeding to speedy repairs. For instance, in the Netherlands, the railway line from Eijsden to Belgium was repaired and put back in operation yesterday evening. Nevertheless, trains will have to wait until travelling to Belgium through this route because restoration works from the Belgian side will not conclude until 2 August.

ProRail, the Dutch infrastructure manager, underlined that the affected countries activated an international contingency mechanism due to the unprecedented situation. Specifically, infrastructure managers from the Netherlands, Switzerland, Italy, Belgium, Germany, Luxemburg and France, are in daily contact, attempting to collectively manage the pressure caused by the floodings and keep rail freight transport going.