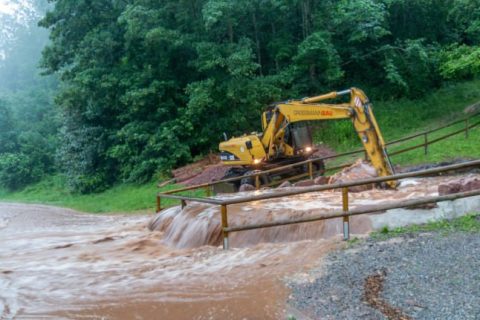 The floods deluging western and central Europe have impaired much of the rail infrastructure in Belgium while also causing problems in the Netherlands. Germany is not to be left out of the country list facing issues due to the severe weather conditions. Infrastructure in the country’s northwest part, including the North-Rhine Westphalia and Rhineland-Palatinate states, is currently experiencing considerable damages while rail freight transport is subject to disturbances.

Trains at a standstill

As a result of the continuously rising waters, trains in northwest Germany are almost unable to move. Consequently, DB Cargo has parked them to enable them to restart quickly after the main routes are operational again. “We are also in contact with all customers to individually coordinate order acceptance, push-through procedures or the prioritisation of supply-relevant trains”, commented a spokesperson.

Shunting and cargo facilities in Hagen are badly affected, and the Wuppertal terminal remains closed. Simultaneously, workers are constantly struggling to repair damaged infrastructure and preserve parts that are still functional. In coordination with DB Netz, DB Cargo is trying to provide alternative routes to trains where possible. So far, these diversions take place over a wide area outside the affected regions, adding considerably more kilometres to train routes.