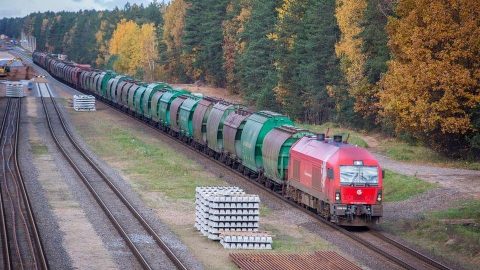 Lithuanian Railways will lose millions from EU sanctions on Belarus

The Lithuanian Railways will lose approximately 24 million on yearly revenues due to the EU regulations imposing sanctions on Belarus. The losses concern the railway activities of LTG Cargo and LTG Infra that will see a reduction of 20 per cent in the transport of Belarusian fertilisers. Simultaneously, the oil products could reduce by half a million tons.

The sanctions imposed by the EU result from the disputed reliability of the Belarusian government. However, they also impact the transport of goods, and for countries like Lithuania that is actively engaged in transporting Belarusian products, such a development could prove devastating.

The sanctions will not be felt directly as they will apply to new contracts and not existing ones. However, if new Belarusian cargo stops running on Lithuanian infrastructure, the revenue losses will mainly impact infrastructure maintenance and development projects.

“Keeping the Lithuanian railway network competitive is extremely important when thinking about the future perspective. We have to continue such projects as repairs of main roads, bridges and culverts, renewal of traffic management systems, electrification of Vilnius-Klaipeda and – of course – construction of Rail Baltica in Lithuania”, said Mantas Bartuška, CEO of Lithuanian Railways.

As a result, the company might need to resort to state support by the Ministry of Transport if estimations prove accurate. “Under EU Directive 2021/34 / EU, the state is responsible for balancing the revenue and costs of the infrastructure manager. This means that the Ministry of Transport must intervene in policy-making when the manager makes too much profit and allocate public funding when the manager’s activities become unprofitable. This safeguard is needed precisely in such situations because otherwise, we would have to shift the burden to all carriers or abandon strategic projects”, underline the Lithuanian Railways.

For LTG Cargo transporting Belarusian products is like playing with fire. It’s not the first time that the company suffers financial losses due to that. Earlier this year, the Belarussian oil exporter company Belorusskaya Neftyanaya Kompaniya (BNK) decided to stop its long-term contract with LTG Cargo which transported its oil products to the Lithuanian Port of Klaipeda.

The underlying motives behind this decision relate to geopolitical pressures applied by the Belarussian government towards Lithuania. BNK’s volumes accounted for 3,7 per cent of LTG Cargo’s freight flows for 2020, meaning approximately two million transported tonnes.

Currently, LTG Cargo finds itself in a similar situation with an even bigger financial impact approaching. However, the Lithuanian company declared that it is prepared and agile for such developments, focusing more on other markets like Poland and Ukraine. Is this the case, though? Could the Lithuanian Railways withstand another strike from the Belarusian side, even though this time it is indirect?