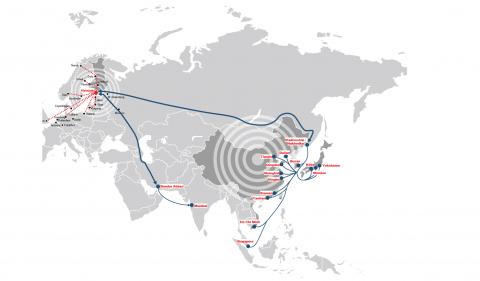 Forget about the Suez Canal, take the train from Helsinki to India

From mid-June, a new blocktrain will connect the Finnish capital of Helsinki and Nhava Sheva, the largest container port in India. It will run via the western wing of the International North-South Transport Corridor (INSTC), which passes Iran and includes a sea leg across Indian Ocean.

The service is offered by Nurminen Logistics, which accordingly, is “history’s first logistics operator that will operate a block train via the western wing of the INSTC. The transit time is approximately 25 days.

The INSTC is a 7,200 kilometer-long freight route connecting India, Iran, Azerbaijan and Russia via ship, rail and road. The line should reduce journey times between Mumbai and Moscow from forty to fourteen days. The main objective of the corridor is to provide an alternative to the traditional routes carried out by sea through the Suez Canal and the Mediterranean and the Baltic Sea.

The line is already operative but will reach its full potential upon completion. The main missing link is the Rasht-Astara railway line in Iran. Two other vital links were delivered in 2018; one connecting Astara in Azerbaijan and the city with the same name in Iran, and another one connecting the Iranian cities of Rasht and Qazvin. Eventually, the infrastructure should be able to handle 15 million tonnes of freight per year.

The new blocktrain is reserved for a Swedish customer of Nurminen Logistics. The line makes sense for Scandinavian countries, as Finland has a natural border with Russia and transit times are much shorter by rail than by sea. The only sea leg included is from the Iranian port of Badar Abbas, and the Indian end destination of Nhava Sheva.

On 3 June, the CEO of Nurminen Logistics, Olli Pohjanvirta, and CEO of RZD Logistic, Dmitry Murev, signed a memorandum of cooperation at the International Economic Forum in St. Petersburg. The document envisages a joint study of logistics opportunities in Scandinavia, Russia, and Asia within the North-South International Transport Corridor framework.

In June, Nurminen Logistics will also start a new weekly train service from the Far-East to the Nordic countries via the Trans-Siberian route. Cargo from China, Japan, and Korea will be collected in the Russian port of Vladivostok,where it is loaded on the train to Helsinki and other Nordic countries.

With this, the Finnish company wants to contribute to the ambition of the Nordic countries to increase the turnover of rail traffic to and from the Far East. This should be more than 10 million euros.