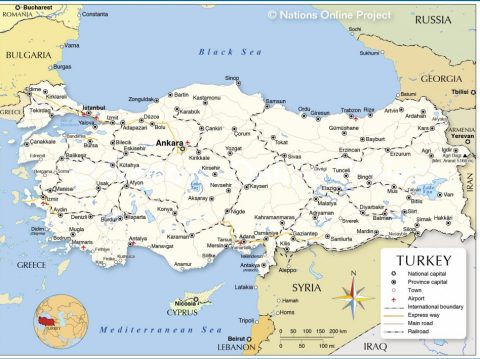 Is Turkey becoming a rail freight hub? There is continuous activity from European rail companies towards Turkey. The country offers rail transport possibilities to and from Europe but also towards the New Silk Road and Central Asia. Hupac and Rail Cargo Group, which have launched connections with terminals there, share their experiences on the emerging market.

The country’s potential lies mainly in its geographic position and economy. It is a crossroad between Europe, Asia and the Middle East. Additionally, it is part of the Baku-Tbilisi-Kars Eurasian corridor, also known as the Middle or Trans-Caspian corridor. Consequently, it offers possibilities for European cargo to reach China through its territory. Moreover, the Turkish economy is quite robust and industrial production in the country is high, says Renzo Capanni, Director Shuttle Net South-East Europe at Hupac. This means that in terms of exports, Turkey is a strong and attractive market for Europe.

Hupac and Rail Cargo Group are some of the key players in European rail freight connecting with Turkey. Hupac has been active in the market for five years now, says Capanni. It connects the Benelux and Ruhr regions with Istanbul daily via Ludwigshafen. Every year it transports approximately 10,000 units in each direction. The cargo consists mainly of consumer goods on the way to Turkey and automotive parts back to Europe.

“Many automotive companies have construction sites in Turkey”, says Capanni, and that is why this is also the main export product along with textile. “Our services to and from Turkey are successful because 98 per cent of transport in the country takes place by road. As a result, there is much congestion, especially on the Turkey-Bulgaria border. In this sense, rail is way more efficient”, he adds.

On the other hand, Rail Cargo Group also connects with Turkey daily. It has a rail service between Köseköy and Budapest that extended to Brno at the beginning of May. “There is a great demand in the intermodal market, and Turkey’s export volumes are very strong as always. With the growing business, there is great potential for us to increase our frequency between Turkey and Europe and CIS countries and China”, commented Bernhard Ebner, Head of Bussiness Unit Intermodal at Rail Cargo Group.

In terms of Eurasian transport, Turkey is undoubtedly a hub for Hupac’s New Silk Road activities, highlights Capanni. The company started operating in the country two years ago and was one of the first to do so. However, Capanni mentions that they do not rely on transporting European products to China through Turkey. Their Eurasian service is feasible due to reloading options. Specifically, there is demand for European products from Turkey and respectively for Turkish products from China. Consequently, a train might depart to Turkey, unload its cargo there and reload with Turkish export products to China. As Capanni underlines, they mainly face problems when returning from China because they hardly have sufficient backloads.

“In 2020, the Turkish market developed together with Eastern Europe as the future markets for Eurasian rail transports”, says Ebner from RCG. “We established a semi-regular transport service via the Trans Caspian Route, which enabled a direct connection from China to Turkey”, he adds. The Austria-based company recognises Turkey as one of the most promising destinations on the New Silk Road, allowing for connections with China and easy cargo distribution to European destinations. The plan for 2021 is to increase the frequency of services to enable more weekly import and export trains.