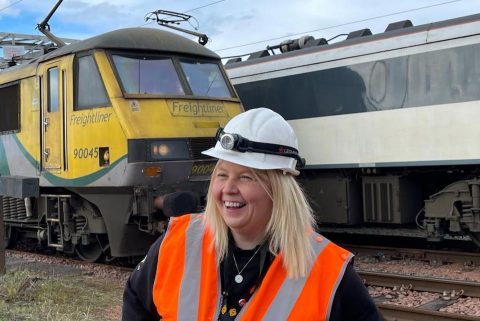 Setting off with a consist of intermodal containers and tankers, Heather Waugh is kept busy hauling electric freight up and down the West Coast Main Line. From her base near Glasgow she has seen the industry grow and change, even since her quite recent switch from passenger operations. Waugh will be discussing her experiences as part of RailFreight Live on Friday, 7 May, when the programme concentrates on recent developments in the UK industry.

After a successful career with passenger operator ScotRail, now turned Freightliner driver, Heather Waugh has become a celebrated individual in the rail freight industry. Yet, despite her personal accolades, she says more than ever it is a team game. Team players have made a difference, she says, particularly as the country has faced the difficulties of coping with the pandemic.

The every growing demand from intermodal customers has seen the sector take over from traditional consists of coal trains and slow moving mixed goods. That though has brought a whole new aspect to the industry. Customers with demanding ‘just in time’ schedules and supply chains have required rail freight to speed up its game, and adhere to strict timetabling. That has called for rapid redeployment of bigger and more reliable engines. When Waugh opens the throttle on an example of Freightliner’s repurposed passenger express locomotives, there’s traction to spare, even with a heavy load and the gradients of the WCML to conquer.

Setting aside the obvious questions of gender in the cab, Waugh says that the issue is not traditional male domination of the industry. Rather, she says, it is about inspiring the next generation. Whether they be boys or girls, she want them to seek out the rail industry as a valid career path. “The responsibility for looking after the safety of two, or three, or even four hundred passengers is immense”, she says, “but it is also immensely rewarding.”

Switching from passenger to freight operations was no diminution of that responsibility, reflects Waugh. “Quite apart from the timely delivery to customers, there is the responsibility for a train that is two thousand, three thousand, even these days four thousand tonnes in weight. Making sure that stays under control is, to me, every bit as responsible a job, and every bit as rewarding.”

Heather Waugh is featured in Friday’s RailFreight Live, setting up a live discussion on the Value of Rail Freight report, published recently by Deloitte on behalf of Rail Delivery Group. Join us at 12 noon (1300 CET) and afterwards via our YouTube channel.