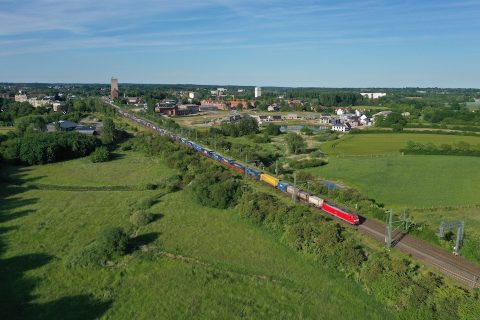 For the first time, a test ride has been carried out with a 835-metre long train from Germany to Sweden. The train departed from Maschen in Germany on 17 April and arrived in Malmö the following morning. The test service was carried out in collaboration with the Swedish Transport Administration, DB Cargo AG, DB Netze and Banedanmark, the Danish rail Infrastructure manager. It is the first time that such a long train runs through the Öresund Bridge connecting Denmark and Sweden.

Today, Sweden allows only 630-metre long trains on most freight routes in the country. An important exception is the Ore Line between Luleå and Narvik, where freight trains may be 750 metres long. With a train length of 835 meters, 55 45-foot containers can be towed, compared with 41 at a train length of the currently allowed 630 meters. It is well-invested money to achieve Sweden’s goal of reducing emissions from domestic transport by 70 per cent by 2030 compared to 2010, says the Swedish Transport Administration’s project manager, Michel Gabrielsson.

The test aims to show the possibility of increasing capacity with the help of longer, heavier and faster freight trains within the framework of what is possible with one locomotive. This is particularly interesting as the locomotive with is the train operator’s largest cost. It is a fixed cost per train, while each extra carriage that is connected provides extra income.

The test journey was carried out with a single locomotive, a train length 835 meters, wagon weight of 2,300 tonnes and speeds up to 120 km/h. The permitted speed is, however, determined individually for each section, depending on the track’s signal system in combination with the train’s braking ability and which carriages are included in the freight train.

The test drive is part of the FR8RAIL II project within the European research and innovation program Shift2Rail. Within Shift2Rail, the Swedish Transport Administration is planning for further tests in Sweden to show that more is possible when the infrastructure is adapted.

At Railfreight.com, we write a lot about long freight trains and the infrastructure needed to facilitate them. If you want to make sure you don’t miss out, you can subscribe to our newsletter. Or, watch our show about longer trains.