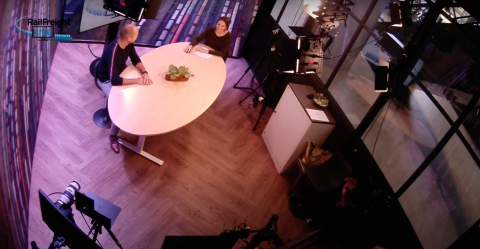 The ban of pocket wagons on semi-trailers in Denmark is having a huge impact on the intermodal industry. One of the affected parties is Skanerail, which operates a train between Coevorden in the Netherlands and Sweden. The losses are about 10 to 15 thousand euros per week. RailFreight Live visited Coevorden and heard their appealing case.

RailFreight Live is the weekly broadcast of RailFreight.com in which the latest news is discussed with experts from the industry. It is broadcasted at 1pm CET on our YouTube Channel, which will also be available on the website of RailFreight.com during the broadcast. It can be found on the Youtube Channel any time afterwards under videos.

You can watch this week’s show here.

In this week’s show, we broadcast an exclusive report of our visit to Coevorden, where we talked to Henri Leemans from Leemans Group, and Lambert van Dieren from NSN Transport, which jointly formed Skanerail.

We also talk to Ton van den Hanenberg, Founder of Dutch Belt & Road Research Center. After many years of research into the Belt and Road initiative and when this could bring the world of logistics, he is retiring from his current position. He is in the studio to talk about the importance of education when it comes to China-Europe transportation.