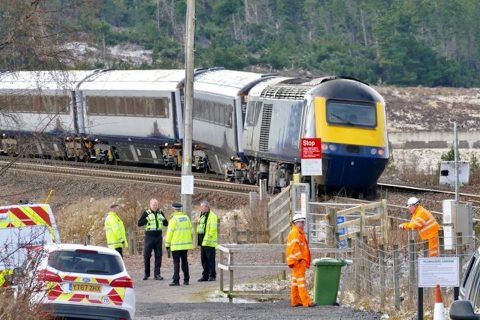 A derailment on the Highland Main Line is expected to keep the line out of action until at least Thursday (14 April). The route, which connects the north of Scotland with the rest of the UK, has been blocked since a test train came off the rails in the early hours of Monday morning (10 April). No one was injured. Investigators are on site to begin their work. The line carries mixed traffic including daily intermodal flows, mainly bound for Inverness supermarkets.

The mixed traffic line between Perth and Inverness in Scotland will remain closed until Thursday of this week, according to the main passenger operators on the route. A passenger test train travelling south derailed on Monday at the remote village of Dalwhinnie, reputedly one of the coldest settlements in the UK. A photo (above), widely distributed on social media and credited to John Cumming, shows the stricken set astride the tracks. Early speculation says that prevailing weather may have been a factor. The UK is in the grip of a very cold spell and frozen points have been suggested as a possible cause.

Supermarket shelves in the Scottish Highland capital of Inverness may run a little low this week. Rail freight is the principal supplier to the region’s retailers. The closure of the line is an operational and logistics headache. However, while passengers are obliged to take a bus around the blockage, freight does have an alternative route, albeit a lengthy detour via Aberdeen.

Ironically, the Aberdeen diversion is a reverse of a recent situation. When the coastal line between Dundee and Aberdeen was blocked due to a partial bridge collapse, freight services re-routed via Inverness and the Highland Line, adding around 200 miles (360 km) to journeys. This was viable, at least in part, because of recently completed enhancements to the Aberdeen-Inverness line in anticipation of more frequent traffic on that connecting route.

Scotrail sensitive to the issue

Scotrail, the operator of the majority of passenger services in Scotland, said the problem arose when one of their ‘Inter7City’ trains came off the rails during a test run. “Because of a derailed train at Dalwhinnie all lines are closed. Disruption is expected until the end of the day on 15/04/21 (Thursday)”, their spokesperson said. “We had an empty train with no passengers on board that derailed in the Dalwhinnie area. Unfortunately we are unable to run services between Blair Atholl and Kingussie in both directions. The train is now back on the track and the track is being checked for any damage caused, which will need repaired prior to the line reopening.”

While the derailment is relatively minor, Scotrail remain highly sensitive to the issue. It was less than a year ago when a similar train set was derailed by multiple landslides near Stonehaven. Three people died in that crash. While this has set back the roll-out of the “inter7City” programme, neither incident has been attributed to the age of the trains. The sets are extensively refurbished examples of the high-speed diesel hauled “High Speed Train” (HST), originally introduced in the 1970s. The sets were in constant use on prestige express passenger runs until very recently, and have been refitted to provide higher capacity and comfort on services connecting Scotland’s seven designated city destinations. Several logistics operators have considered the remaining sets for express light goods services and the common opinion is that the HST has many more useful years in service.

As always, the independent accident investigators, the Rail Accident Investigation Branch (RAIB), has dispatched a team to the scene.“RAIB is deploying inspectors to gather evidence following the derailment of a test train at Dalwhinnie in Scotland”, says their statement. “The train consisted of a short-form HST that was travelling south when the last two vehicles derailed in proximity to points.”

RAIB investigates accidents and incidents which occur on the UK main line networks – Network Rail and Northern Ireland Railways, London Underground, other metro systems, tramways, heritage railways and the UK part of the Channel Tunnel. With the cold snap continuing, investigators, engineers and operators will be hoping that repair and restoration can be completed as quickly as possible. Keen observers say that the derailed stock had only just been delivered to Scotrail.

Contrary to popular belief, the Highland Line has never been entirely double track. Consequently, capacity is limited, and freight services often wait in passing loops for more frequent passenger services to cross. The Scottish government has been challenged to improve the line to take traffic of the parallel trunk road. Network Rail has been working for over a year to improve the line to accept HST sets, mainly by extending platforms and some of those loops. Monday’s test run was in support of these works.