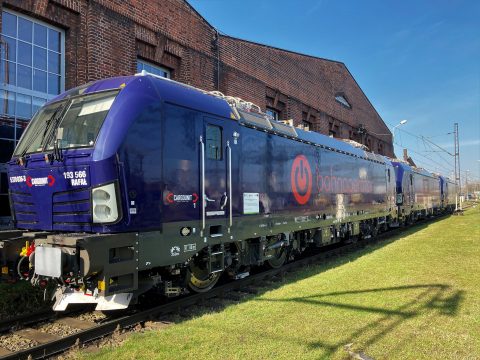 Bahnoperator and Cargounit, a leading locomotive rental company in Central and Eastern Europe, have sealed a five-year cooperation agreement to lease five new Siemens Vectron locomotives. The Germany-based logistics company will need them to establish a licenced railway carrier company. After signing a contract back in November 2020 to open an independent rail company, Bahnopertor already received the three Vectron locomotives in late March and will receive the remaining two around June.

As a subsidiary of Beijing Trans Eurasia Logistics (BTE), Bahnoperator is among the key rail transport players between China and Europe. It connects eight major European hubs with Asia, and from these hubs, it offers multiple onward connections with twenty-six weekly departures. Currently, it focuses on launching its own railway company in collaboration with its Polish subsidiary Bahnoperator Polska.

With the addition of the state-of-the-art locomotives that can be used universally and facilitate international cross-border and intermodal traffic, Bahnoperator will have the opportunity to expand its preexisting Eurasian network and services without relying on other railway providers.

According to Marcel Stein, Managing Director of Bahnoperator, the Siemens Vectron locomotives have much to offer in terms of speed and efficiency. Since they do not require changes, especially when travelling on European tracks, they will shorten the company’s transit times. Customers will be the first to benefit from this development since BAhnoperator will be more agile in adjusting to their needs. “Being able to offer our customers services as a carrier and operator at the same time is an important step for further quality assurance”, mentioned Stein.

Together with Bahnoperator, Cargounit also sees many advantages in the new collaboration. “The purchase of Vectron locomotives that we have leased to rail operators is in line with our strategy of modernising the fleet and geographically diversifying the services offered. In the coming years, the Cargounit plans assume an intensive program to replace used locomotives with modern ones, both for our customers in Poland and for new customers gained in Centra and Eastern Europe”, commented Lukasz Boron, CEO of Cargounit. The Polish company firmly believes that introducing environmentally friendly locomotives will also boost intermodal rail transportation across the New Silk Road.